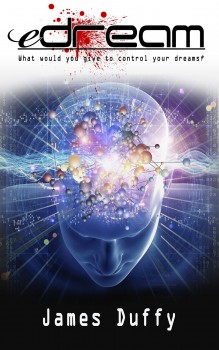 What if you could choose the setting and people within your dreams? TV science reporter Nina Russo is excited about the possibilities, especially after her lover Bob Cole, developer of Techtran’s eDream software, introduces her to the wonders of lucid dreaming. But once the program hits the streets, there is an unexpected backlash. Nina sees signs of mass public addiction developing. Her apprehension turns to dread when she learns the true origins of the dream program. FBI agent Scott Williams agrees with Nina. eDream must be stopped. Together, they face off with Techtran’s ruthless management team who will protect their multi-billion dollar windfall at all cost. The stakes grow higher when Bob discovers a deadly virus embedded in the software code—a virus that takes foreign cyberterrorism to a shocking new level. Within hours of the discovery, Bob is dead. Now Nina and Agent Williams must stop the code from activating and slaughtering millions of innocent dreamers in their beds.

eDREAM is available from Amazon.

“eDream” was selected by Amazon staff and readers as one of the first 10 books to be published by Amazon’s new Kindle Press publishing arm. The book received one of the highest scores in the Kindle Scout competition, which Amazon used to develop its initial publishing slate.

In addition to the tech-thriller “eDream,” James Duffy is the author of two historical adventure novels: “Sand of the Arena” and “The Fight For Rome,” both from McBooks Press and both earning positive reviews from journalists, bloggers and readers. Starting as a news producer for the CBS affiliate in Miami, Jim spent the past 38 years as an Emmy Award-winning writer/producer of TV documentaries for Discovery, Travel Channel and the Armed Forces Network. He also authored the graphic novel series “Cisco Kid” for Moonstone Books and has written for a variety of national magazines.