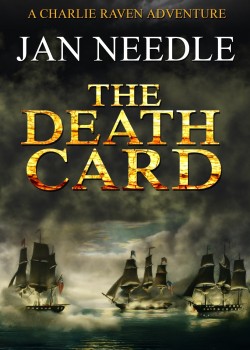 In more than a century of wars, mainly with France but latterly with the rebel colonies of America then the United States, the British navy forged a reputation based on skill and courage. By careful use of what might be recognized today as brilliant PR, it became known as a force combining brilliance and great humanity. In English eyes, its officers could do no wrong. They did, of course. The two most infamous mutinies of the 19th century were brought about by the inhumanity of William Bligh of the Bounty, and Hugh Piggott of the Hermione. In the long years that followed, both these sadists were revenged. The perpetrators were hunted down across the globe and put to death. Charlie Raven goes to sea on his uncle’s sloop, to find himself not in a world of gallantry but of mysterious and unremitting hatred. In two short historical thrillers, he is forced to fight for his survival, not from the enemy, but from his fellow officers and his uncle, Hector Maxwell. They are history with a twist, shining a grim new light on a myth that has stood the test of time.

THE DEATH CARD is available from Amazon.

Jan Needle was born in Portsmouth, England, and became a journalist aged seventeen. At twenty three he went to University in Manchester, where he started writing plays, then graduated to novels with an alternative version of Kenneth Grahame’s The Wind in the Willows called Wild Wood. He wrote for television and stage, then began writing thrillers in his thirties, unflinching examinations of viciousness and cruelty, from World War II through drug and gang crime. His first novel about the Royal Navy in Nelson’s time, A Fine Boy for Killing, was described by one critic as ‘Jack Aubrey with the gloves and rose-tinted spectacles torn off.’ Death Card is the second of Charlie ‘Craven’ Raven’s adventures, which started a few months ago with The Devil’s Luck.