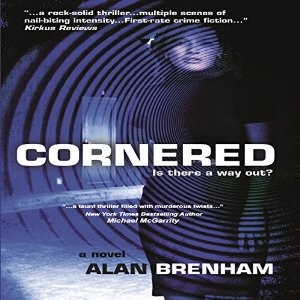 Not wanting history to repeat itself, Detective Matt Brady struggles to solve the disappearances of seven young women, but he quickly finds himself pitted against a criminal organization that knows as much about police procedure as he does—an organization that will do whatever it takes to stay one step ahead of him. His troubles are compounded when a young veterinarian injects herself into the investigation and is targeted to become victim number eight. When he tries to protect her, he finds himself in the crosshairs of a professional cop killer. Can Brady solve the case in time to save his new love, or will this investigation be the death of both of them?

CORNERED is available from Amazon.

“Alan Brenham’s Cornered is a taunt thriller filled with murderous twists and turns that will satisfy readers who love good crime fiction. As a cop and a lawyer, Brenham has been there and done that and in this, his second outing, the authenticity of his storytelling ability continues to shine through.”
Michael McGarrity, New York Times Bestselling Author of Hard Country & Backlands

Alan Brenham – Alan Behr in real life – served as a law enforcement officer and criminal investigator for over 17 years before earning a law degree from Baylor University. After obtaining his law license, he worked as a prosecutor and criminal defense attorney. After retiring from government service, he authored three crime novels – Price of Justice, Cornered, and the soon-to-be published Rampage under the pen name of Alan Brenham. He is presently working on two more novels, a psychological thriller, and the sequel to Cornered. Alan and his wife live in the Austin, Texas area.

The Death Card by Jan Needle