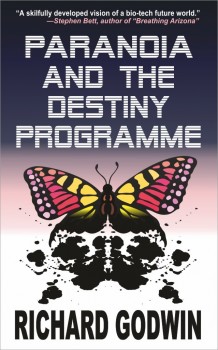 ‘I see no butterfly wings in the Rorschach test, but a mountain of bones.’ So says Dale Helix, who is convinced he is being abducted by a shadowy group of rulers called The Assembly. He claims they have programmed him to kill. International novelist Richard Godwin’s latest title is set in a dystopian city, and is an exploration of totalitarianism, paranoia and social engineering in a society where it is impossible to gauge the truth. The aim of the programme is to study the link between serial killers and dictators in order to clone the ideal dictator. And the Assembly are engineering a new gender. Is Dale insane or is his paranoia a key to a hidden truth?

“That horrible taste in the back of your throat? That sense that something, some thing, has slipped up behind you and is walking in step? Celebrate them. Richard Godwin does — brilliantly.” – James Sallis, author of Drive

PARANOIA AND THE DESTINY PROGRAMME is available from Amazon and Amazon UK.

Godwin’s prose marches inexorably on, pulling us deeper into this truly Kafkaesque world. Shocking images blast the reader almost constantly, helping to create the shattered world that Helix experiences. There are shades of 1984 or Brave New World here, and even a bit of the classic TV show The Prisoner….” – Tangent Magazine

Richard Godwin is the critically acclaimed author of novels Apostle Rising, Mr.Glamour, One Lost Summer, Noir City, Meaningful Conversations and Confessions Of A Hit Man. He is a crime and horror writer as well as a produced playwright. He was born in London and obtained a BA and MA in English and American Literature from King’s College London. His stories have been published in many magazines and anthologies. He has 29 distinct works in print.

Apostle Rising, published in 2011, met with excellent reviews worldwide and sold foreign rights throughout Europe. In it Detective Castle is faced with a copycat killer with detailed inside knowledge of a case he failed to solve. The killer is crucifying politicians. Castle enters a deadly labyrinth, and at its centre is the man he believes was responsible for the first killings. He’s running a sinister cult and playing dark mind games with the police.
His second novel Mr. Glamour was published in 2012. It is a story about beautiful people in a designer world living on a precipice with a predator in their midst. One bestselling author has already said he hopes you do not recognise yourself in its pages.

It is truly a page turner.

It will keep you guessing until the end.

His Chin Wags At The Slaughterhouse are highly popular and unusual interviews he conducts with other authors and may be found at his blog http://www.richardgodwin.net/blog

You can find out more about him at his website http://www.richardgodwin.net/.

The Jericho Tablet by Barry Webb