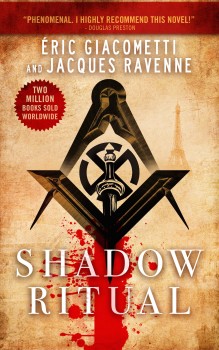 There is a whole world—literally—of thrillers and mysteries being produced in non-English speaking countries, a rich tapestry of characters and stories, many of which, unfortunately, never make landfall on Anglophone shores. Great stories, no matter the genre, can transport you to other lands and offer worldviews of people from different cultures, to see an alternate vision of the world through very different eyes. Combine that with a passion for thrillers and mysteries, and, voila, you have all the ingredients for a truly compelling read. So when the opportunity came up to write about Eric Giacometti and Jacques Ravenne’s thriller SHADOW RITUAL, I jumped at the chance.

Two savage murders set opposing forces on a deadly collision course that spans the European continent. One is a sinister occult society with Nazi roots on the cusp of discovering the final pieces of a puzzle that could reveal an ancient Freemason ritual that promises to unleash immense power. The other is crack police detective and high-ranking Freemason Antoine Marcas, who reluctantly joins fiery intelligence officer Jade Zewinski in a desperate chase to track down the ruthless assassins. To identify the perpetrators of an ever-widening spiral of violence, they, too, must unravel the secrets of the mysterious ritual, and in doing so they become the assassins’ next targets.

Eric Giacometti and Jacques Ravennes live and write in France, and their thrillers, featuring Antoine Marcas, have been translated into seventeen languages and sold over two million copies worldwide. SHADOW RITUAL, the first book in a series of nine Marcas thrillers, has sold 250,000 copies, and is the first to be translated in English. Let’s hope there are more English translations of their Antoine Marcas series to come.

Before we get to the questions Eric and Jacques graciously answered for The Big Thrill, I wanted to give a shout-out to the translator, Anne Trager. Anne is an expat American and has lived in France for decades. It was her love of all things thrillers, mysteries, and detective novels that compelled her to found Le French Book, a New York­–based publisher that has translated and published over a dozen French mysteries and thrillers so far. Bravo, Anne!

Collaborative writing can be a challenge, particularly in fiction, so can you tell us how do you work together? What’s your writing process?

It’s more like alchemy for us. We have been friends for thirty-five years and we trust each other’s judgment entirely. First, we think about three main points: the theme, the key stakes, and then the main antagonist who will confront our recurrent character Antoine Marcas. We never start writing until we have agreed on these three key points. Over the years, we began to spend more time on plotting and coming up with a detailed outline.

We first come up with an outline together, setting up the plot, balancing narration and characters, weaving in suspense and planning the cliffhangers. We see each other nearly everyday during this phase. Then we do the research, each on his own. Finally, we write, separately as well. The novels in the series that follow SHADOW RITUAL are built around two plot lines—one set in modern times with Marcas, and the other historical. We each do one of the plot lines, and then we switch and rewrite what the other wrote.

Eric, you studied biochemistry and genetics in Toulouse and are an investigative journalist. And Jacques, you are a literary critic, and have held elected office.  What prompted both of you to write fiction? And what brought you to the decision to write a series?

In addition to our training and our jobs, we’ve also had a passion for esoteric secrets and stories since we were young. In fact, we met in a shared quest. At the age of sixteen, we explored Cathar castles in search of the Grail, which led us to Templar outposts, and Rennes-le-Château, the small village behind the legend of Jesus’s descendants and the invention of the Priory of Sion. When the Da Vinci Code came out, we already knew the whole story by heart.

What was behind your decision to have Antoine Marcas as your protagonist? Aside from Jacques’ personal experience from being a high-ranking French Freemason, was there anyone in real-life who inspired your protagonist? The antagonist?

The character stemmed from long discussions we had. Eric had investigated corruption scandals linked to Freemasons on the French Riviera, while Jacques, as a master mason, couldn’t understand why the media was so fierce in its attacks against freemasonry. He felt it was unfair and simplistic. From these discussions, which were often heated, we created Antoine Marcas, a Freemason cop who is proud of his ideals and values, but aware of the pitfalls of the brotherhood. As for the antagonist in SHADOWN RITUAL, we based Sol, the SS officer, on French soldiers who had joined the Nazi forces and who fought for the Reich to the end. Some were even among the last soldiers to defend Hitler’s bunker when Berlin fell in the spring of 1945.

The plot hinges quite a lot on historical facts: the history of the Freemasons, Nazi occultism, the Templar Knights, among other elements. History can sometimes get in the way of a good plot, so how did you balance being true to history while plotting the fictional side?

The main mistake in this kind of book is being over the top. In SHADOW RITUAL you won’t find a single Templar shield, an Illuminati hood, or a descendant of Jesus. Rather, well reveal the esoteric side of Nazism, and the persecutions against Freemasons in Occupied France, by both Nazis and the Vichy government. It only took a few months from the time the Nazi’s took over for freemasonry to be banned. Freemasons were chased from government jobs, and collaborationist newspapers published the names and addresses of brothers. This persecution explains in part why Freemasons are more discreet in France than they are in the United States. From these facts we wove in fiction.

The main structure of the story revolves around an incredible, true story of Freemason archives that the Nazis stole from France in 1940. The Red Army then recovered them in 1945, and the Russians only returned them to French Freemason in 2000. Alfred Rosenberg, a theoretician for the Nazi Party, led a vast operation to plunder archives. He really was a member of the Thule, a secret society that played a role in Hitler’s rise to power. Rosenberg was convinced that Freemasons held some powerful secret. To find out more about what that secret may be, you will have to read the book, of course. That said, we are quite happy to share our research and inside information, so you can know what is fact and what is fiction in SHADOW RITUAL.

Any plans for more of Antoine Marcas’s thrillers coming to us in English?

The next book to come out in English is scheduled for early 2016. It holds stories of alchemy and information from unpublished documents about the Statue of Liberty that we found in the Freemason Library at the Grand Orient of France headquarters in Paris. But shh… it’s a secret. 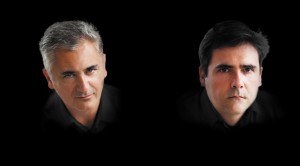 Jacques Ravenne is a literary scholar who has also written a biography of the Marquis de Sade and edited his letters. He loves to explore the hidden side of major historical events. Eric Giacometti was an investigative reporter for a major French newspaper. He has covered a number of high-profile scandals and has done exhaustive research in the area of freemasonry. Anne Trager has a passion for crime fiction that equals her love of France. After years working in translation, publishing and communications, she founded Le French Book.