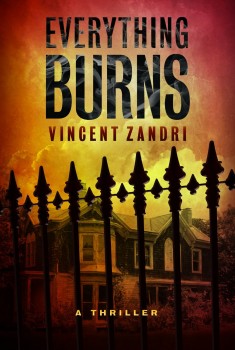 Vincent Zandri is the NEW YORK TIMES and USA TODAY bestselling author of more than 16 novels including THE INNOCENT, GODCHILD, THE REMAINS, MOONLIGHT RISES, and his latest, EVERYTHING BURNS.

When Reece Johnston was a boy, a fire destroyed his home, killing his mother and brothers while leaving him scarred for life. It also kindled something dark inside him: an irresistible attraction to flames in all their terrifying, tantalizing power. But after two failed arson attempts and two trips to the mental ward he was finally able to put down the matches and pick up the pieces.

With a career as a bestselling crime writer going strong, Reece is working to fix his broken marriage to Lisa and be there for their preteen daughter, Anna. He’s not just dealing with his own demons; there’s a world of deadly hurt bearing down on him in the form of the jealous rival he’s bested in literature and love, who’s determined to see Reece crash and burn. But a guy like Reece knows how to take the heat. And thanks to his lifelong friendship with fire, he also knows how to bring it.

Vincent chatted with The Big Thrill about his new novel and his past work.

What sparked the idea (pun intended) for EVERYTHING BURNS?

The basis for the plot was derived from the true story of my second wife and myself. We divorced some years ago, but stayed very close. For a while, my ex dated a would-be novelist. I found this rather odd since we, novelists, don’t exactly grow on trees. So what are the chances of that? Then one day, for reasons I won’t go into here, my ex-wife and I decided to start dating again. During that time, she underwent cosmetic eye surgery. On the morning her mother picked her up for the surgery, I also found out that the ex-boyfriend-would-be-novelist had been calling and texting again. Bingo! The plot for Everything Burns suddenly shot into my brain like a transfusion. The bit about the fire and the pyromania came later.

You have three different series characters. Why? Do you have a favorite?

Each one of them is so different. Keeper Marconi is the serious, aging, somewhat disillusioned-by-all-mod-cons guy. He’s most definitely living in the past. There’s Dick Moonlight who can’t get out of his own way and who wears his heart on his sleeve. Because of the little piece of bullet stuck in his brain he could die at any moment, so he carries around a profound sense of justice. Then there’s Chase Baker who, in another life, I would like to be. Smart, tough, a Renaissance man in that he’s a novelist, a treasure hunter, a tour guide, a sand hog, a private detective, an international lover, and all around adventurer, the guys plays by his own rules. I travel a lot for the Chase books because I like to bring the real sights and smells of the exotic locale I’m writing about to the page. While researching the most recent Chase, Chase Baker and the Golden Condor, I spent a week in the Amazon Jungle where I cracked the plate in my foot that required four permanent screws. I was also bitten by a piranha. My guess is a piranha has never bitten Dan Brown.

Do you prefer writing books in a series or standalones?

When I’m writing a standalone book I look forward to writing a series book. And vice-versa. I try to adhere to the Henry Miller school of thought in that you finish one book from A to Z before even thinking about your next project. But I write full-time and audiences are demanding more and more books for their Kindles and iPhones, so I find myself sometimes working on a standalone while outlining a series book. One thing I’ve noticed is that my standalones take far longer to write and usually contain a more literary thread while the first drafts of my series books are more pulpy and can be written in as little as a month. Right now, I’m averaging two to three new novels per year, with maybe a novella tossed in.

How do you like Thomas and Mercer as a publisher?

Like I told the New York Times this past summer, T&M has thus far been my most satisfying publishing experience in terms of sales, marketing, advance draw downs, editing, and just all around fun. And I’ve had quite a few publishers along the way, from big guys like Dell to little guys like StoneGate Ink. T&M is staffed with good people, many of whom incidentally, enjoyed stellar careers in more traditional NYC publishing. I don’t get to attend all of their dinners and events, but when I do it’s something to see. I have this reputation now for ordering pretty much the most expensive thing on the menu, which usually tends to be the most massive steak or something like that.

Has the digital revolution destroyed print? Does it even matter?

No, digital hasn’t destroyed print. Nor will it. I look at it this way. I believe that five years from now, there will be more publishing opportunities as editors break away from the old houses that are still more or less stuck in their traditional ways, and open up new shops that will focus heavily on eBooks but that will also offer paper and audio. Crooked Lane books is an example of one these new publishers. It’s run by Dan Weiss who was a major player at St. Martins. In terms of being an author, the digital revolution has mostly been a boon to authors who now are able to maintain a list of independently published books as well as traditionally published properties. What do they call it? Hybrid Publishing? Well, I’m officially coming out now as a hybrid author.

How did your author trailer come about?

I was asked to shoot it in LA by executive producer/writer Edward Alves who lives out there. He’s a big fan of my work and put up all the dough for it. He insisted that I write, direct, and produce. So, I thought, what the hell? We kind of shot it guerrilla style, without a script right on sight on Sunset Boulevard and at the Avalon Hotel. It was a blast. I got my sig other in on the action and some other people. The finished product is terrific with a great musical score. It was very much influenced by the opening to True Detective and even some Lana Del Rey music videos. For those who wish to check it out you can click here.

I’m working with Thomas & Mercer on the follow-up to Everything Burns which was an editor’s pick as a Kindle First (Since January 1, “Burns” has moved close to 300,000 units and also enjoyed a spot in the Amazon Overall Top 10 for five weeks straight). The follow-up is another stand-alone psychological thriller in the tradition of my novels The Remains, Scream Catcher and Everything Burns called, Aziz. I’ve also just completed Orchard Grove, my most noir and hard-boiled stand-alone to date. I’m not sure which house is picking it up, but I’ll know soon. I’ve also just completed the first draft of what will be the third episode in the Chase Baker series, Chase Baker and the God Boy. I researched this one in Nepal and Northern India last June. I’ll publish this one through my new imprint, Bear Media. On the drawing board is another Dick Moonlight for Down & Out Books, and another Jack Marconi. I head to North Africa in late April to research Chase IV and back to Europe for the Fall and early Winter seasons. I’m still doing some journalism, but that seems to be taking a major backseat to the fiction. For the full scoop on what’s happening in my world and to join my “For Your Eyes Only” monthly newsletter, go to my website. 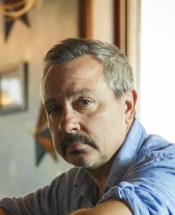 Vincent Zandri is the NEW YORK TIMES and USA TODAY bestselling author of more than 16 novels including THE INNOCENT, GODCHILD, THE REMAINS, MOONLIGHT RISES, and the forthcoming, EVERYTHING BURNS. He is also the author of numerous Amazon bestselling digital shorts, PATHOLOGICAL, TRUE STORIES and MOONLIGHT MAFIA among them. Harlan Coben has described THE INNOCENT (formerly As Catch Can) as “…gritty, fast-paced, lyrical and haunting,” while the New York Post called it “Sensational…Masterful…Brilliant!” Zandri’s list of domestic publishers include Delacorte, Dell, Down & Out Books, and Thomas & Mercer, while his foreign publisher is Meme Publishers of Milan and Paris. An MFA in Writing graduate of Vermont College, Zandri’s work is translated in the Dutch, Russian, French, Italian, and Japanese. Recently, Zandri was the subject of a major feature by the New York Times. He has also made appearances on Bloomberg TV and FOX news. In December 2014, Suspense Magazine named Zandri’s, THE SHROUD KEY, as one of the Best Books of 2014. A freelance photo-journalist and the author of the popular “lit blog,” The Vincent Zandri Vox, Zandri has written for Living Ready Magazine, RT, New York Newsday, Hudson Valley Magazine, The Times Union (Albany), Game & Fish Magazine, and many more. He is a resident of both New York and Florence, Italy.