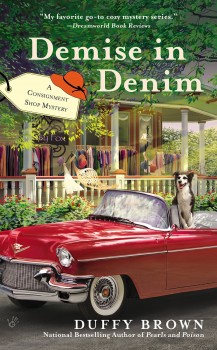 All my life I thought launch was what really smart rocket scientists do to get something into space. Never in all those years did I expect to be involved in one. Yet here I am dong a launch of my very own. Not that I’m putting a rocket in space—though right now that seems like a snap—but I’m launching a book.

“What do you mean launch?” I asked my publisher. “The book comes out on a specific day, booksellers, B&N and Amazon put it up for sale, end of story. Done. Right?”

Wrong. To launch my first cozy mystery, ICED CHIFFON, I though it would be fun to do something different. I’ll have a mystery party at my house, I decided, with a real live mystery for the guests to solve. I have the house and I like parties. A match made in heaven.

Sixty is a nice number and I can just buy one of those interactive mystery party packs online and set up the mystery event based on that. Piece of cake.

First off, there are no mystery party packs for sixty online. They had packs for twelve, but not five times the number. That meant I’d have to write the mystery. And if people are coming to my house I have to serve food and beverages.

Thirty years ago I decided I wanted kids and my husband went along with it. That gave me four waiters and barkeeps for my party. It took me a week to write the mystery event for the party with characters and clues.

A few things I discovered along the way. The most important is the more alcohol the better the party. And I confirmed my ability to write a mystery. The second is that your friends are there for fun more than finding out who-done-it. And did I mention the alcohol?

The theme was Roaring Twenties and Duffy’s Speakeasy. I cheated and bought a mystery party pack for twelve to see how they laid out the characters, clues, who knew what, who killed who. It gave me a starting point and I went on from there.

I divided the guests into families, the Manicotti family, the Ravioli family, the Linguini family, and so on.   You get the picture. I think I did this at night when hungry.

The family members were Bunny the Blade Biscotti, Larry the Lip-man Linguini, Rick the Rum-runner Ravioli, Tess the Teetotaler, Suzie Suffragette, Sister Mary Holy Water and other crazy names that came to me at two in the morning. Working in families made everyone pool info and try and figure out the killer. It was a great icebreaker as many people in the group didn’t know each other, but had to start talking and laughing and drinking right off the bat. And speaking of drinking, we had bathtub gin, Al Capone’s Machine Gun Fiz, Dillinger Delights, and the Bloodier Mary.

Each guest was notified before the party as to their character, if they were packing heat, poison, a blade, rosary beads, or a Votes for Women sign. Everyone had a back story with lots of family rivalries, enemies, affairs, double-crosses, and lies. It was pretty much HBO with martinis.

Dinner was delivered in an ambulance complete with sirens and hunky paramedics. The costumes were amazing, the murder scenes Oscar quality. I even hired three thugs to raid the party and steal everyone’s jewels and take my daughter hostage. (When they found out how much her college tuition was they gave her back.)

Many launch parties are about selling the book at the event. I wanted this party to be about introducing the world to Duffy Brown, my new pen name for the mystery genre, in an entertaining way. And it worked! The whole night my guests kept their friends on Facebook and Twitter entertained with the shenanigans going on at Duffy Brown’s Speakeasy. And of course, these pictures were shared and retweeted. There is no better promo than word of mouth.

I’ve had three parties now and each time it gets better. Readers talk about Duffy’s mystery party for months before and after. If you’re a mystery author it’s a great gig—do it. If you’re a mystery reader get invited to one, it’s a blast. If I do party four I’ll let you know. I’d love to have one at the Cincinnati conservatory with a Clue theme. You know, Miss Scarlett in the conservatory with the candlestick. That’s my dream. I’ll let you know when the invites go out. 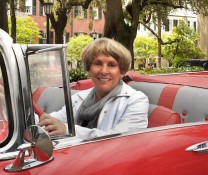 While others girls dreamed of dating Brad Pitt, Duffy Brown longed to take Sherlock Holmes to the prom. Today she conjures up who-done-it stories for Berkley Prime Crime and has two series, the national bestselling Consignment Shop mysteries set in Savannah and the Cycle Path Mysteries on Mackinac Island. Geared for the Grave the first book in the Cycle Path series is a December, 2014 release. Duffy wrote romance as Dianne Castell for Harlequin and Kensington and is a USA Today Bestselling author.

To learn more about Duffy, please visit her website.