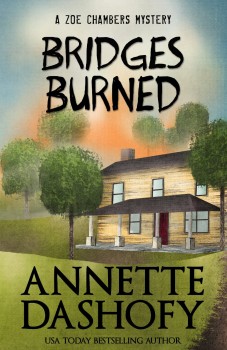 There’s a reason why some authors prefer to write stand-alone novels: penning a series is no picnic. Readers demand fresh new adventures, but at the same time, the character must stay the same, but show a degree of change from one book to the next. In other words, it is a balancing act. In BRIDGES BURNED, the third entry in the Zoe Chambers series, Annette Dashofy walks that tightrope, and she graciously agreed to answer a few questions for The Big Thrill about her series, her writing, and her life.

What can you tell us about your new book?

In BRIDGES BURNED, paramedic Zoe Chambers is used to saving lives, but when she stops a man from running into a raging inferno in a futile attempt to rescue his wife, Zoe finds herself drawn to him, and even more so to his ten-year-old daughter. She invites them both to live at the farm while the grieving widower picks up the pieces of his life.

Vance Township Police Chief Pete Adams, of course, is not happy with this setup, especially when he finds evidence implicating Zoe’s new houseguest in murder times two. When Zoe ignores Pete’s dire warnings, she runs the very real chance of burning one too many bridges, losing everything—and everyone—she holds dear.

Tell us about Zoe Chambers.

Zoe loves her job as a paramedic. It’s a perfect fit with her natural caregiver tendencies. However, she continues to be conflicted regarding her future with the Coroner’s Office. She likes the idea of investigating crimes, but she’s struggling with the whole autopsy thing.

Since this is the third book, what can we expect from her?

Zoe and Pete have gotten closer, but that sometimes means they simply have a better knowledge of each other’s “buttons” and how best to push them. Zoe’s always had a weakness for animals and kids, and this book shines a light on her “mother bear” instincts as she fights to protect ten-year-old Maddie, who has just lost a parent, something Zoe knows about. Plus Zoe is facing more loss herself.

Short of giving away the plot obviously, what can you tell us about the antagonist?

I think this particular antagonist started out with good intentions, but greed derailed him and one “mistake” led to another and another until there was no turning back. He had “burned his bridges.”

I did a number of interviews with insurance and banking experts, since I have no expertise in those areas and they both played into the plot. And I toured a “burn house,” used by firefighters for training purposes. Nothing at all against my insurance agent and my banker, but the burn house was definitely the most fun!

Absolutely. I’ve signed a new contract with Henery Press for three more Zoe Chambers mysteries, and I already have them mapped out.

I’m working on the fourth Zoe Chambers mystery. In it, Zoe and Pete are in deeper trouble and more danger than ever before when an unknown gunman starts picking off emergency responders. No definite release date yet, but I suspect it will be spring 2016.

Zoe’s old farmhouse plays a large role in this book. Is it based on a real place?

Yes. I’ve recreated a fictional version of my grandparent’s farmhouse where I grew up. It’s no longer standing, but my memories of every detail are so strong, I loved using it as Zoe’s home. And let me just say, I did not plan the ending to this book, it just happened. And no, I’m not elaborating. You’ll have to read it to find out what I mean. 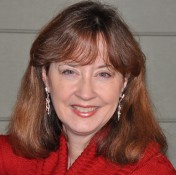 Annette Dashofy is the USA Today bestselling author of the Zoe Chambers mystery series about a paramedic and deputy coroner in rural Pennsylvania’s tight-knit Vance Township. CIRCLE OF INFLUENCE (Henery Press) was published in March 2014, followed by LOST LEGACY, which was released in September 2014, and BRIDGES BURNED, available in April 2015. Her short fiction includes a 2007 Derringer Award nominee featuring the same characters as her novels.