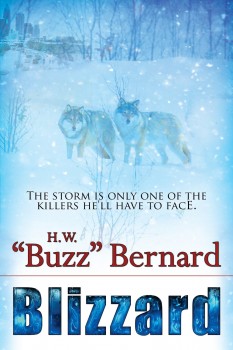 As a monstrous blizzard threatens to bury Atlanta, GA, high-tech business executive J.C. Riggins braves the storm to deliver a company proposal. If he doesn’t, the company will lose a big contract—and Riggins will lose his career. Meanwhile, weatherman Tom Priz is also fighting to keep his job. He can’t tell his boss, the beautiful and ambitious Sophie Lyons, just how bad the snow and wind will get because if he guesses wrong, they’ll become media laughing stocks and get tossed out onto the frozen streets.

In BLIZZARD, H.W. “Buzz” Bernard delivers a thriller that will tumble over you like an avalanche. Here, Bernard took some time to answer a few questions about his latest release, offer up advice for new writers, and tease a little about what he’s working on next.

In BLIZZARD, the narrative is actually two big stories woven together—the plotlines of J.C. Riggins and Tom Priz each trying to save their careers. The story depends a lot on the narrative switching back and forth between what’s happening to J.C. and Tom, yet the two characters live in separate worlds. I imagine this type of story would be hard to manage as a pantser, so what was your process?

My first novel, Eyewall, involved three different plot lines. I was advised by an experienced author to write the first draft of the book as three separate “novelettes,” then fit them together into a single, coherent story. Easier said than done. The “fitting them together” bit turned out to be a lot like working on a jigsaw puzzle that required me to cut and whittle the pieces to make everything fit. I decided maybe that wasn’t the best way to do things. So, in BLIZZARD, I basically wrote in chronological order, switching back and forth between the plot and subplot, at a pace I thought would keep readers engaged.

Sophie Lyons, Tom’s boss, was a great foil to present the commercial realities behind the weather business. Was she based on someone you know?

Not really. She and Tom represent the extremes of a dichotomy that exists in the real world: the split between professional meteorologists who endeavor to present forecasts of major weather events in a responsible, objective manner; and, members of the media who are too often all about generating hype, headlines, and hyperbole. Both characters are products of my imagination.

You introduce Alfred Tillman (Gandalf), the Special Consultant, another great character in the weather forecasting business. He was a great way of explaining the technicalities of weather forecasting without bogging down into an info-dump. He also supplied a good dose of dramatic relief. Again, was Gandalf based on someone you know?

Gandalf, or Tillman, is a composite of characters, mainly old-school, experienced forecasters I’ve worked with over the years. His grumpy, acerbic facets, especially relative to growing older, are probably a little bit of me.

You have a great command of word craft that allowed me to speed through your story. But at the same time, you did an excellent job fleshing out the characters and making sure the scenes had necessary drama. How did you learn how to write long fiction and what about the craft do you keep in mind as you write the story?

You learn the craft first of all by studying it, but in the end, mostly by doing it. In my case, I spent ten years writing four different manuscripts before I finally got published. And the learning is far from over. I’d like to think, and my editors at Bellebooks seem to agree, that each novel gets a little better as I learn more and more about the craft.

The one thing I try to keep most in mind as I write, is the need to keep the reader turning the pages. I try to make certain I have a hook at the end of virtually every scene.

While the stakes were already high enough, you really amped up the drama by introducing McCracken and his girlfriend Lynne, who injected some serious hard-boiled tension into the story. Where did these characters come from?

Both McCracken and Lynne are made-up characters. Lynne got a little larger part than I had initially envisioned for her, but that’s the fun of writing: characters often take on lives of their own and vector stories in unexpected directions.

Step us through your process of writing a novel. Where do you start? How do you keep track of the details as you work through the manuscript? Do you outline the major plot points or do you let them grow organically as you write the first draft?

With me, a novel starts in my head. I basically just think about it for several months without even making notes. What I’m trying to do is flesh out the main plot. That may include coming up with ideas for a couple of key turning points and perhaps a notional ending. When I feel I’ve got a good grasp on what the key story is, I’ll start to outline, make notes, and develop a subplot or two. I’ll also begin to write short biographies for my characters, usually nothing more than half-a-page for each.

My outlining is quite broad. It’s just laying out a roadmap without a lot of detail—just enough to know where I’m going. It’s often no more than a couple of pages. And it’s a “living document.” By that, I mean it may change as I write, as may the biographies of some of the characters.

I think of my outline as a strategic plan with the actual writing being the tactical means of accomplishing that plan, scene by scene. My characters often drive the scenes and that’s where the real joy in writing is for me. I know what I want to accomplish in each scene, but I never know exactly how I’m going to do it until I start typing. My characters guide me.

Any advice you want to share with newbie writers? What was your biggest surprise after you got published?

Newbie writers—you have to keep at it. Study the craft, learn it, then write, write, write. It’s simple: butt in chair, fingers on keyboard.

Biggest surprise-—now that I’ve had four novels published I’m amazed at how much time I have to spend on the business of writing as opposed to just writing. On many days, it’s about a 50/50 split. It’s not what most writers want to do, but it’s part of the job description.

Who are your favorite authors? And why?

James Lee Burke and Daniel Silva are probably my two most favorite novelists (I actually have a lot of favorites.) Each takes a different approach to embedding the reader thoroughly in a story: Burke through his wonderful descriptions of setting and the detailed etchings of his characters; and Silva through the finely crafted portraits of his characters as well, but also through the narratives of their histories as they relate to the drama at hand. Both are masters of dialogue.

Of course, in the end, as bestselling author Steve Berry will say, “ya gotta tell a good story.”

What’s your next book? Any hints about what to expect?

The working title of my next book is Tsunami. It’s set in the Pacific Northwest and deals with the threat of a megaquake and massive tsunami, not unlike those that recently rocked Indonesia and Japan.

A huge earthquake and tsunami however, are inevitable for the Northwest; it’s happened many times in the geologic past, and will again. We just don’t know when. But enough time has elapsed since the last catastrophic event that scientists realize a repeat could occur tomorrow—or several centuries from tomorrow. Naturally, in Tsunami, you can expect the threat to be a little more imminent than several centuries from now.

H. W. “Buzz” Bernard is a best-selling, award-winning novelist. His debut novel, Eyewall, which one reviewer called a “perfect summer read,” was released in May 2011 and went on to become a number-one best seller in Amazon’s Kindle Store. His second novel, Plague (“One of the best thrillers of 2012?–novelist Al Leverone), came out in September 2012, and won the 2014 EPIC eBook Award in the suspense/thriller category. His third novel, Supercell, (“Races along with the speed of a twister”—novelist Michael Wallace) became a best seller on Kindle and a finalist in the 2015 EPIC eBook Award competition. Blizzard, his newest novel and the third in his “weather trilogy,” was just released.
Before retiring, Buzz worked at the Weather Channel as a senior meteorologist for 13 years.  Prior to that, he served as a weather officer in the U.S. Air Force for over three decades.  He attained the rank of colonel and received, among other awards, the Legion of Merit. He’s a native Oregonian and attended the University of Washington in Seattle where he earned a bachelor’s degree in atmospheric science; he also studied creative writing. Buzz currently is vice president of the Southeastern Writers Association.  He’s a member of International Thriller Writers, the Atlanta Writers Club and Willamette Writers. He and his wife Christina live in Roswell, Georgia, along with their fuzzy and sometimes over-active Shih-Tzu, Stormy. Buzz is represented by Jeanie Loiacano of the Loiacano Literary Agency.