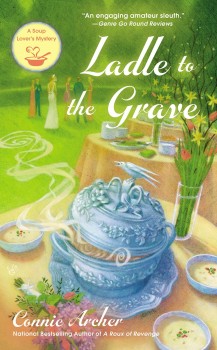 LADLE TO THE GRAVE is the fourth installment in the Soup Lover’s Mystery Series by Connie Archer.  The books follow the story of Lucky Jamieson, whose life was turned upside down when her parents met an untimely death in a car crash on an icy road.  Lucky has returned home to the cozy, idyllic town of Snowflake, Vermont, to run her family’s popular soup shop, “By The Spoonful,” but (as is wont to happen in these cozy, idyllic towns) murder is afoot…

The latest book opens in the woods. It’s almost May, and some of Snowflake’s local ladies have organized a celebration to welcome the arrival of spring. But it doesn’t quite go as planned, does it?

Certainly not!  It’s a murder mystery after all. I had a lot of fun imagining this scene and it actually turned out a bit more humorous, I think, than I had originally anticipated (that’s if you ignore the death throes of the local woman.)

New England has a rich and fascinating history, but also a dark one.  At the time I was working on LADLE TO THE GRAVE, I was reading a very well-researched non-fiction work on the Salem Witchcraft trials of 1691-1692. This book was far more chilling than any horror story I could have imagined. So I think a bit of that concurrent reading inspired the pagan scene. Now, I’m not equating paganism with horror, not at all; however, that’s not how the early Puritan colonists would have viewed it.

Growing up in New England I always felt the shadow of its Puritanical past, its history of witchcraft trials, even its Indian massacres. And I’m reminded of Shirley Jackson, a transplanted Californian, who said she was inspired to write The Lottery and other horror stories after her years of living there.  I understood what she meant about the “hauntedness” of that part of the country.  That’s one of the reasons it’s been so enjoyable for me to write a series set in Vermont and to juxtapose the comfort and safety of the village against the sense of danger lurking in the woods.

For anyone new to your work, how would you describe the Soup Lover’s Series? In what ways does it conform (or not conform) to the “cozy” genre?

I think of this series as a dark village mystery. It incorporates all the required elements—i.e. the murder victim was not well-loved, and the red herrings and dangling clues are nicely tied up and explained at the end; the village is charming; the core characters are lovable; but the crimes are dark, and explore the depths of human behavior. To me, that’s the crux of crime fiction in all its forms. What forces cause an ordinary person to commit murder? Greed? Revenge? A desperate belief that his or her survival is at stake?

No matter the genre, both readers and writers enjoy delving into the dark side of human nature. That’s why we love these stories. Otherwise, we’d be writing literary fiction with no bodies strewn around at all. Think how boring that would be!

Thanks in large part to Snowflake’s quirky characters, the books have a lot of light and humor, but they don’t shy away from darker matters, murder being principal among them, but also Lucky’s grief over the loss of her parents.

How do you balance the light with the dark as you write? Is it a conscious process?

Whatever mechanical manipulations have to happen to create the plot and the clues and the red herrings, I always try to stay in touch with the humans who live inside the fictional characters. I hope I’ve accomplished that in some small way.

Characters come alive and stay with us when readers can identify with them and their trials in life. Without that emotional connection, I don’t think readers will come back again and again to the next book in a series. Whether one reads for escape, adventure, or vicarious thrills and chills, that connection is essential.

When the series started, Lucky was reeling from the death of her parents—the people she had always loved, but taken for granted, were no longer there. For anyone who’s lost someone close, and that’s all of us I suppose, there’s no way to gloss over that depth of feeling. It isn’t something anyone recovers from immediately by any stretch. Grieving and readjusting is a long slow process, and I wanted to do justice to Lucky’s feelings in this regard.

Lucky studied theater at the University of Wisconsin, and coincidentally, you yourself have some experience in the theater.  Are there other similarities between you and Lucky? As a writer, how much of yourself do you pour into your characters? Is there anything you learned in the theater that informs your writing now?

I think every writer pours himself or herself into their characters. They are all children of our imagination. An acting coach once said that all of us, no matter what paths we pursue in our work or life, have hundreds of characters sitting in the gallery of our mind. I think that’s very true.

Lucky, my protagonist, is probably the better angel of my nature. She’s thoughtful and kind and always willing to help others. That is a part of me, but I think I’m a bit more like Sophie. Sophie is cynical and outspoken and sometimes sarcastic and cuts to the chase. Sophie is my protagonist’s dark foil. She can say all the things that might not be appropriate for my cozy heroine.

Actors become experts in the portrayal of emotional responses—facial expressions, voice, body language, subtext behind speech—as do observant writers. The trick is translating that knowledge into the written word. Without that background, I really don’t know how I would have been able to write. I think the path, as hard as it can be, would have been so much more difficult.

What are you working on now? What’s next for Lucky and the Soup Lover’s Series?

The fifth book in this series, A CLUE IN THE STEW, will be out Spring 2016. Then, I do plan, in the not too distant future, to start work on an unequivocal thriller. In the meantime I’ve been working on a project about another amateur sleuth, slightly older and wiser, and far more urban. She’s an astrologer in San Francisco who becomes involved in murder investigations because of her clients. In The Madness of Mercury, she is targeted by a megalomaniac preacher who declares war on those he believes are an abomination to the Lord—psychics, gays, astrologers, anyone who doesn’t fit the “accepted” life style.  I’m hoping this first book finds a good home soon.

I also want to find time to work on an idea I have about two well-past-middle-aged, unemployed actresses in Los Angeles who fall upon hard times and must band together to survive, even though they despise each other—a glimpse into the real life of actors who can’t afford the gas to reach Malibu.  Maybe this one could be brash, tasteless, and even funny. I don’t know. I’ll have to see when I get there.

Connie Archer is the national bestselling author of the Soup Lover’s Mystery series from Berkley Prime Crime. A Spoonful of Murder, A Broth of Betrayal and A Roux of Revenge are set in the imaginary village of Snowflake, Vermont. The fourth book in the series, Ladle to the Grave, will be released in March 2015.