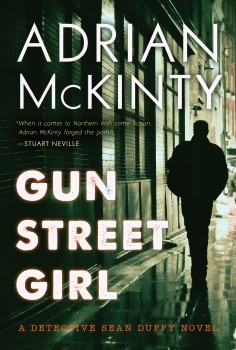 I love international crime fiction—thus this column—and I’d long wanted to read something set during the Troubles (the brutal internecine conflict over the constitutional status of Northern Ireland that I remember so vividly from my youth.) Adrian McKinty, an award-winning Irish writer who grew up in Belfast, was recommended to me by a friend, and so I picked up a copy of GUN STREET GIRL, Adrian’s latest novel featuring Detective Sean Duffy, a Catholic police officer working the mean streets of Belfast during the Troubles.

And what an inspired recommendation it was. A fascinating mystery grounded in historical events, a setting that taught me something about the world, and spare but beautiful prose: GUN STREET GIRL was just what I wanted.

A little about Adrian: he’s written sixteen books in total, including four in the Detective Sean Duffy series. The first three form a loose trilogy, though Adrian tells me that any of the four can be read as standalones. While I’m itching to read the first three, I certainly had no problem jumping right in with GUN STREET GIRL.

Adrian’s complete list of awards and nominations is too lengthy to include. Some of the highlights: he’s been called a “master of modern noir” by The Guardian, and “one of his generation’s leading talents” by Publishers Weekly; he won the 2014 Barry Award for I Hear the Sirens in the Street (an Detective Sean Duffy novel), for which he was also shortlisted for the 2014 Grand Prix de Littérature Policière; The Dead Yard was selected by Publishers Weekly as one of the twelve Best Novels of 2006 and won the 2007 Audie Award for best thriller/suspense; In the Morning I’ll Be Gone won the 2014 Ned Kelly Award for best fiction, was shortlisted for the 2015 Audie Award for Best Thriller, and was named as one of the ten best crime novels of 2014 by the American Library Association.

And without further ado, here’s my brief interview with Adrian:

Thanks for taking the time to chat, and wow, did I love GUN STREET GIRL. What a fantastic piece of writing: dark, gritty, and raw, yet also lyrical and quite moving. A touch of humor, a touch of romance, more than a touch of good Irish whiskey, gobs of style. Exactly what one wants in a piece of noir fiction. Did you always know you wanted to write mystery novels? How did you come to the genre?

The books that appealed to me most as a kid were science fiction and classic noir mysteries. I went to a very traditional school in Ireland where we read a lot of Victorian fiction and almost nothing from the twentieth century, so when I discovered The Big Sleep in Belfast Central Library it was an incredible experience. Fiction could actually be fun to read! I was never a big ideas kind of person so that ruled out science fiction, and I went naturally into mysteries when I decided to become a writer.

Though I’ve always been fascinated by the Troubles, this was my first foray into fiction set during the time period, and I really felt the setting come to life—probably because you lived it. I realize you’ve left it on the page, but briefly, what was it like growing up in council housing in Belfast? 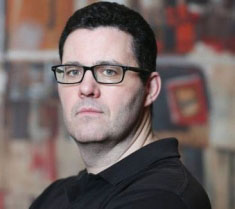 Very strange. On one hand there was a real sense of community in that everyone knew everyone else, all the kids played together in the street at big communal games of football etc.; but on the other hand one of my next door neighbors was a paramilitary commander who went to prison for a triple murder (three separate killings actually so in effect he was a serial killer.) There was also a big paramilitary presence and of course rumbling in the background because of the Troubles, so every day there would be a bombing or a shooting, or at the very least a big bomb scare. And of course every July, annual riots. Throw in rain, media, anarchy, the spotlights of army helicopters flying low over the city and you’ve got yourself Blade Runner.

I think that the crucible of war—sort of like the crucible of love—makes for great literature. As someone who grew up smack in the middle of a decades long civil conflict, but who has written about other topics as well, what do you think? Should we write about what we know, what interests us, or . . . what?

I was initially quite reluctant to write about the Troubles. In fact I was positively discouraged from writing about the period by publishers, agents, etc. because I was told that no one would want to read a book set in that era. My American publishers hated The Cold Cold Ground (the first Duffy book) and dropped me because they said the series wasn’t commercial. I was told quite explicitly that Americans in particular have a very nostalgic view of Ireland, and anything that didn’t fit into that image wouldn’t sell. I was pretty alarmed by all that, but felt I had to tell the story of that period anyway so I soldiered on with the book. And then The Cold Cold Ground was published and I ended up getting the best reviews of my career, winning a couple of awards, and actually selling some books. So it was the best kind of vindication and good advice for any wannabe writer: tell the story you want to tell and stick to your guns. If no one buys your book at least you went down swinging and staying true to your artistic vision.

What got you started as a writer? How long did it take you to write your first novel?

I was teaching English in Denver, just noodling around with short stories, and one day started work on what became my first novel, Dead I Well May Be.

Without giving away too much, the basic premise of GUN STREET GIRL is that a Catholic detective (Detective Sean Duffy) in the mostly Protestant Royal Ulster Constabulary (Belfast’s police force, highly militarized because of the Troubles) is assigned to a murder that ultimately involves MI5, the Americans, and the paramilitary organizations patrolling Belfast. I suppose in America, it would be the equivalent of a cop trying to conduct a murder investigation during the Civil War, and it makes for a great juxtaposition. I loved the history lesson, the complexities of the investigation, and especially the tensions inherent in the main character, Detective Sean Duffy. How did you come up with him?

Duffy is based on two different Catholic police officers I knew in the RUC. Back then there were very few Catholics on the force (I think less than fifteen percent) because the IRA had a bounty on Catholic police officers and because many of the older Protestant police officers were just plain old-fashioned prejudiced. And with Duffy, there’s a little bit of me in there too obviously. (He shares some of my music tastes and dress sense.) I wanted to take a Catholic who was a little more educated and Bohemian, and a cop (!), and plump him down in the middle of a Protestant housing estate in the north Belfast suburbs (on the street in fact where I grew up) and just let the sparks fly and see what happened.

Is there anything else would you like to tell us about your novel?

It’s the fourth book in a series but that shouldn’t put you off. I write all these books as standalones so anyone can jump in anywhere. What else to say? Well, I take a lot of trouble over these books to make them funny and interesting and I take a lot of time over the prose too. As Ted Sturgeon famously said, ninety percent of everything is crap.

Detective Sean Duffy is a lover of great music; I assume you are too. Does this feature in all your novels? What do you listen to when you write?

Shit, I love music, man. I have a couple of thousand vinyl albums and if I had unlimited financial resources, I’d just spend my time listening to music and reading good books. [Editor’s Note: I’m with you, Adrian.] Wow, that would be awesome. Unfortunately I can’t listen to music when I write as I get way too into it and don’t focus on the books.

There was a line in the novel, “The lesson here: stay away from Americans in Ireland. This was their backyard, this was their playground.” I’m curious (and don’t worry, no political subtext here), was this the prevailing sentiment at the time? What role did the large number of Irish Americans play in the Troubles?

Irish Americans in the Troubles played just about the same role that Americans played in Vietnam or in Iraq or in Afghanistan. With limited knowledge of the situation on the ground they blundered in and tried to make things better and in most cases made things a lot worse, alas.

I’ll pass on a question I was once asked: W. Somerset Maugham famously once said, “There are three rules for writing the novel. Unfortunately, no one knows what they are.” Do you agree, or disagree, and why?

I know what they are but I’m not telling.

What are you reading right now?  Who are some of your favorite authors?

Okay, so who’s going to play Detective Sean Duffy on the big screen?

Is Fassbender available? Nah, we probably can’t afford him. An unknown who will work cheap and can do a Derry accent.

If you read it out loud and it sounds shite it probably is and needs to be re-written. Also—adverbs—please use sparingly.

What you are working on now? Are there any more Detective Sean Duffy novels in the works?