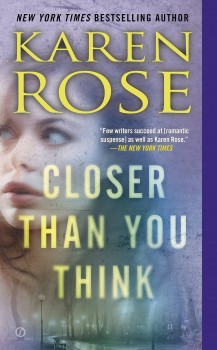 An inheritance of an old house in Cincinnati is a dream come true for psychologist Faith Corcoran—a refreshing change from the nightmare of the last year. After being stalked by a former client, Faith hopes the sanctuary of this new place can help her face the dark fears that haunt her. But she has no idea how close to home her fears still are.

Meanwhile, two college girls from the area have gone missing, and FBI Special Agent Deacon Novak is called to work the case. When his inquiry unexpectedly leads him to Faith, he finds a beautiful and brave woman he can’t help but fall for.

Soon they’ll discover that this seemingly simple investigation is anything but. And reaching back decades into Faith’s past will shatter everything she believes to be true, and gives terrifying new meaning to flesh and blood.

This month, I sat down with #1 international bestselling author Karen Rose, who has rightfully earned her title as “Queen of Romantic Suspense” (Crime and Publishing), to talk about her new release, CLOSER THAN YOU THINK.

Is this a standalone novel, or are the characters recognizable to readers that have read your other books?

Yes to both! All of my novels are written to stand on their own, although many connect to other books in both the story arc and characters. CLOSER THAN YOU THINK starts a new series set in Cincinnati and is a good place for readers to jump aboard. The hero—FBI Special Agent Deacon Novak—has been featured in two previous books, Did You Miss Me? and Watch Your Back, part of my Baltimore series, and has been one of my favorite characters since he walked into his first scene, completely unannounced and unplanned! The heroine, Dr. Faith Corcoran, is a new character.

Tell us a little about Faith’s world. She’s been stalked, which is a real fear for many women. How did it all start?

Faith is a psychologist who provides therapy to victims of sexual assault, and sometimes to the offenders. She was stalked by a former client, an ex-con who blames her for his incarceration.

Are any of the plot details based on real events that you read about?

Actually, some of Faith’s background as a psychologist stalked by a former client comes from a personal family experience. Many years ago my husband, a trained mental health therapist, was also counseling victims of sexual assault, and sometimes their abusers. The offenders he counseled came to him as a condition of their parole or probation. One offender attacked my husband, intending to kill him. Later, the offender threatened him and his family while being taken away to serve a prison sentence that was much too short. Some of Faith’s fear was my fear, still very real even after fifteen years. We relocated to a different state after this assault and my husband left the field. It was simply too dangerous.

What’s the most interesting thing you learned while researching for this novel, whether or not it wound up in the book?

I did quite a bit of research into the art of embalming, although not much of it ended up in the book. The ability of certain embalmers to preserve a body for decades fascinates me (and scares me on a certain level too.) I’ve been interested in this field ever since I shared dorm space with students of a mortuary school in Cincinnati. They were very … unique people. They were quite Goth, long before it became trendy. One of the students had a hearse as his personal vehicle and he would take some of the mortuary students on picnics. They posted photos of their events on their dorm doors, mostly to get a reaction from the rest of us.

What’s are you working on next?

Next up is the second book in the Cincinnati series and features characters introduced in CLOSER THAN YOU THINK. I’ll reveal more once readers have read Deacon and Faith’s story.

Since it’s February, what sort of special night would Deacon plan for Faith for Valentine’s Day?

What a fun question! Hmm, I think he’d set a fine table in a well-lit room, because Faith doesn’t like the dark. He’d serve her Skyline Chili five-ways (a Cincinnati specialty.) Then they’d settle in for a Marvel movie marathon, since they’re both comic book fans. Included would be “X-Men” and “The Avengers” as Ice Man and Black Widow are Deacon and Faith’s favorite characters, respectively. Then they’d turn the lights down low and, well, you can fill in the rest.

Is there anything you would like new readers to know about you or your upcoming releases?

I think there’s quite of lot of me in Deacon’s character—or perhaps how I wish I’d been. The reason for Deacon’s white hair and odd eyes comes from a genetic disorder that runs in his family. I’m very familiar with this disorder as it runs in my family too. As a child, it marked me as different from the other kids, some of whom could be very cruel. I learned to be invisible, to lurk on the sidelines and watch others rather than join in with whatever was happening. Perhaps all of this lurking and observation helped me become a writer, but had I known then what I know now, I would have owned those differences and rocked them, just as Deacon does. So his character in CLOSER THAN YOU THINK is a bit of a do-over for me. I think lots of us have moments or situations that we would do over, with the benefit of age, wisdom, and experience. Being an author lets me do that—and allows me to insert snappy comebacks into my dialog, even though I usually don’t think of them in real life until it’s too late.

Good luck with the release. It sounds like a great book!

Thanks! I hope readers love Deacon and Faith’s story!

Award-winning, #1 international bestselling author Karen Rose has earned her title as “queen of romantic suspense” (Crime and Publishing) with her novels Watch Your Back, Did You Miss Me, No One Left to Tell, and You Belong to Me. She earned her degree in chemical engineering from the University of Maryland. For a number of years, she worked in the engineering field, earning two patents, but she began writing novels when scenes started to fill her mind and her characters would not be silenced. Since her debut suspense novel, Don’t Tell, was released in July 2003, she has written more than a dozen novels and been translated into twenty-three languages. Her books have placed on the New York Times, the Sunday Times (UK), and Germany’s der Spiegel bestseller lists. A former chemical engineer and high school teacher, Karen lives in Florida with her family, her cat, and her dogs, Loki and Freya.