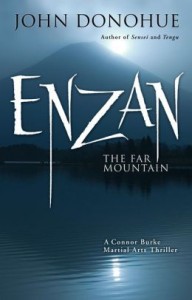 This month we introduce to you author John Donohue’s latest novel ENZAN: THE FAR MOUNTAIN, an awesome thrill ride of martial arts action that goes deeper than mere fists.

From his home near New Haven, Connecticut, Donohue is an expert on the study of martial arts. He holds a Ph.D. in anthropology, researches and trains in the martial arts, and has been banging around the dojo for more than thirty years. He is the author of ten books, including the award-winning Connor Burke martial arts thrillers SENSEI, DESHI, TENGU, KAGE, and now ENZAN: THE FAR MOUNTAIN.

Tell us about ENZAN: THE FAR MOUNTAIN.

ENZAN is the fifth book in the thriller series that features Connor Burke and his master teacher Yamashita. While a thriller, it’s also a story that explores relationships in families, between teachers and disciples, and the toll our commitment to each other sometime takes.

But if somewhat reflective it’s also action packed. It features both a modern-day adventure for the main character in the series, Connor Burke, as well as the back story of his teacher. The plot revolves around a young woman named Chie Miyazaki. She is wild and spoiled—the pampered child of a cadet line of the Imperial House of Japan. When she disappears in the United States accompanied by a slick Korean boyfriend, it sets off alarms among elite officials in Japan’s security apparatus.

The Japanese want the problem solved quietly, so they seek out Connor, who is the prize student of Yamashita Sensei. Burke suspects that he’s being used, but he accepts the assignment out of honor for his revered teacher.

A covert search-and-rescue operation turns into a confrontation with a North Korean sleeper cell, and Burke finally discovers the secret that drove Yamashita from Japan so many years ago and the power behind the decades-old connections that pull Yamashita and Burke back into danger in the service of the imperial family.

What drew you to study martial arts?

I was always a bookish kid and not terribly gifted physically. We played a lot of sports growing up in suburban Long Island and I was never as good as I wanted to be. Plus there was the world of books, which exerted a powerful hold on me. I developed an early interest in other cultures (something that never left me and led me to pursue a Ph.D. in anthropology). The exotic allure of the Asian martial arts, combined with their complex philosophical component, really attracted me—physical activity with a philosophical rationale! Plus the arts are tremendously difficult to master and so persistence and discipline are highly valued. I may not have been much of an athlete, but I could be persistent.

When I was doing my graduate studies I focused on Asian culture. When I developed the idea of studying Japanese martial systems as cultural artifacts, the martial arts teachers welcomed me in, but also said that I’d never completely understand these arts unless I actually did them.   So, thirty-plus years later I’m hooked on both the intellectual study of the martial arts as well as the physical practice. I have black belts in karate and kendo and have also studied aikido, judo, and iaido.

What inspired you to create the characters of Connor Burke and Yamashita?

For Connor, I drew on the classic underdog/wiseguy characteristics so common to main characters in detective mysteries. Connor is a bit of an outsider—an American who devotes himself to the study of the Japanese combat system—which means that his family thinks he’s odd and the Japanese never completely accept him. I fleshed out the character with the unique spin of my background growing up Irish American and Catholic in suburban Long Island combined with my own experience studying the martial arts (although Connor is far more skilled than I am).

Yamashita is an amalgam of quirks and characteristics I’ve observed while studying with some truly outstanding Japanese teachers, as well as the general behavior that you see in old-school Japanese martial arts instructors. They are aloof and perceptive, highly demanding and not always terribly communicative. They are very much in the authoritative, emotionally distant father-figure mode and, of course, Yamashita is a type of surrogate father to Connor.

Your martial arts experience seems extensive, but primarily rooted in the Japanese arts. What led you to concentrate on Japanese arts as opposed to others like Korean or Chinese?

I’ve had some exposure to both Korean (Tang Soo Do) and Chinese (taiji) arts, but the bulk of my experience is with Japanese systems. Why Japanese? Luck, I suppose. During my undergraduate years there was a really first-class karate sensei named Mori Masataka teaching at the university and I got my first in-depth exposure to training under his guidance. And once I got hooked on Shotokan karate, I naturally gravitated to other Japanese arts. I’ve had some truly excellent teachers in judo and kendo in particular, and was able to continue both my academic research and martial training in the Japanese tradition.

Obviously, your experience in the dojo has informed your writing to a large degree, but what about the stories themselves? Where do the ideas for your books come from?

I’m forever noting articles in the New York Times about crimes that seem interesting and off-beat. Since I come from the New York area, I’m also familiar with various neighborhoods, settings, and the types of characters and activities associated with them. I use this color to flesh out my stories but at heart the plots are classic thriller, with an initial set-up (often a murder), the involvement of my main characters, various complications and vicissitudes, and a gigantic fight at the end that leads to closure. It’s an often-used but highly effective formula.

And finally, the question to which all readers of this interview are likely dying to hear the answer. You walk into your dojo on a late afternoon and find a table with four books on it, JOHN CARTER OF MARS, THE HOBBIT, ENDER’S GAME, and THE LONG DARK TEATIME OF THE SOUL. You reach out and grab one book. Through a weird twist in the space-time continuum, you are instantly sucked into that book’s world and it comes alive. Which book would you chose?

Oh, THE HOBBIT without a doubt. No disrespect to Orson Scott Card or Douglas Adams, but Tolkien’s work is both richly imaginative and has a strong moral sense at its core. Action and adventure should, in my mind, have a purpose beyond just the experiential. THE HOBBIT is a story about Bilbo’s adventures, as well as a journey of self-discovery. It’s filled with humor and excitement, as well as tragedy. And, as we know, it’s just the prelude to a larger adventure that pits good against evil.

But to get off my high horse, who wouldn’t want to be transported to a world with a wise wizard, elves, dragons, dwarves, and hobbits? I also like the fact that Bilbo is not the biggest or strongest or bravest person in the world, but he has a certain strength of character that makes him an important figure in the doings of Middle Earth. Bilbo has a sense of himself and what’s important. He’s willing to put himself in danger to do the right thing. He perseveres. Come to think of it, he might have made a really good martial artist.

John Donohue is novelist and scholar, an expert on the study of the martial arts. He began exploring their fictional possibilities through a series of well received thrillers: SENSEI, DESHI, TENGU and KAGE. ENZAN is the fifth in the series.  His books won numerous awards and received strong reviews in Publisher’s Weekly, Kirkus, the Huffington Post, USA Today and the Chicago Sun-Times.