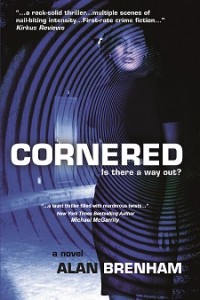 Writing just seemed like a natural career move for Alan Brenham, former U.S. Treasury special agent, patrol officer, criminal prosecutor, criminal defense attorney, and a current reserve deputy sheriff. His first novel, PRICE OF JUSTICE, received the Best in Police/Crime Fiction Award from the Texas Association of Authors 2012–2013 and was a finalist for the 2014 International Book Awards and the Eric Hoffer Award’s The da Vinci Eye, as well as the 2013 Beverly Hills Book Award.

Now, his second novel, CORNERED, due out in July, is launching to great acclaim. Kirkus Review, for one, praised it as “A rock-solid thriller….multiple scenes of nail-biting intensity…first-rate crime fiction…”

Perhaps the most gratifying comment comes from one of Brenham’s favorite authors, Michael McGarrity, New York Times bestselling author of HARD COUNTRY and BACKLANDS: “Alan Brenham’s CORNERED is a taunt thriller filled with murderous twists and turns that will satisfy readers who love good crime fiction. As a cop and a lawyer, Brenham has been there and done that and in this, his second outing, the authenticity of his storytelling ability continues to shine through.”

In CORNERED, not wanting history to repeat itself, Detective Matt Brady struggles to solve a case involving the disappearances of seven young women, but he quickly finds himself pitted against a criminal organization that knows as much about police procedure as he does—an organization that will do whatever it takes to stay one step ahead of him. Haunted by the memory of a kidnapping case gone wrong, Brady must now discover what happened to seven missing women, plus a murder. He is sure the cases were connected, but how?

His troubles are compounded when a young veterinarian injects herself into the investigation and is targeted to become victim number eight. When he tries to protect her, he finds himself in the crosshairs of a professional cop killer. Can Brady solve the case in time to save his new love, or will this investigation be the death of both of them?

Recently, THE BIG THRILL was lucky enough to catch up with Brenham and ask him a few questions:

Before we talk about CORNERED, what inspired you to write thrillers? Was it a natural fit because of your background, or was it a special book you read or an author you admired?

It was actually a combination of my background in law and law enforcement as well as three authors I admire—Michael McGarrity, John Sandford, and Michael Connelly.

In your work, you explore serious issues that affect all of us. How much of these types of crime have you encountered? Do you have to do a lot of research for your books or are you able to draw primarily from your past (and present) law enforcement experience?

As both a police officer and, later as an attorney, I encountered all of them in one form or another. The human trafficking element was related to immigrant smuggling but, at that time, I didn’t know if the immigrants were brought in for sexual purposes or for forced labor. In CORNERED, a collateral murder case was included. That case was derived from a spousal murder I had worked when I was a detective with the Temple Police Department, the agency referenced in this novel.

Since police investigative techniques have changed drastically from my days with the Temple Police, I did a truckload of research regarding modern techniques and procedures as well as crime lab capabilities.

Human trafficking happens everywhere. Traffickers like small cities and towns because they believe they are less likely to get caught. The human trafficking aspects are true: men, women, and children are forcibly taken or tricked into what amounts to slavery right here in the United States. However, the story presented in CORNERED is, of course, all fiction.

What is it you want your reader to walk away with after finishing CORNERED?

Even though the reader will, hopefully, come away feeling entertained by the fictional story, the reality is that we all should realize that the human trafficking problem is happening all around us every day and that each of us should be cognizant of their surroundings.

In exploring your website, I noticed you are already working on a third book. Can you tell us a little about what you have in the works?

Right now, I’m completing a novel titled RAMPAGE, which will be the sequel to my first novel, PRICE OF JUSTICE. Detective Scarsdale and his new partner, Tatum Harper, investigate a rash of robbery-murders committed by a gang led by a spree killer.

Another book, titled GONE WRONG, is in the planning stages and will follow an assistant district attorney with an appetite for the dark side. 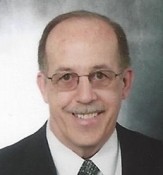 Alan Brenham is the pseudonym of Alan Behr, an American author and attorney. He served as a law enforcement officer before earning a law degree from Baylor University, and worked as a prosecutor and criminal defense attorney for twenty-seven years. His personal and official travels took him to several European and Middle Eastern countries, Alaska, and almost every island in the Caribbean. While contracted to U.S. military forces, he resided in Berlin, Germany, for two years. Alan and his wife, Lillian, currently live in the Austin, Texas area.