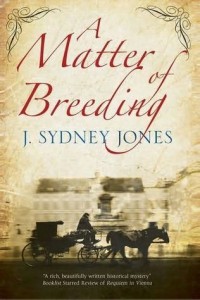 October, 1901. Lawyer and private-inquiries agent Karl Werthen accepts an assignment to protect the famous Irish writer Bram Stoker while on a speaking tour of Vienna. Meanwhile, his colleague, criminologist Dr. Hanns Gross, has been called away to advise on a bizarre series of murders near his hometown of Graz in the Austrian province of Styria. Three women have been killed with strange mutilations and scarring patterns left on their bodies. The third and most recent victim has had her unborn baby cut from her womb. Back in Vienna, Werthen’s wife Berthe is investigating what seems to be a fraudulent breeding scheme involving the prized Lipizzaner horses. Could these investigations possibly be connected?

Matters become complicated with Werthen and Stoker’s arrival in Graz. For, having read wild newspaper accounts of vampire killings, the author of DRACULA insists they investigate.

Welcome Mr. Jones, and thanks for stopping by to visit with us.

Call me Syd, please. And it is a pleasure to chat with you.

Tell us a bit about your new historical thriller, A MATTER OF BREEDING.

In my fifth installment of the Viennese Mystery series, A MATTER OF BREEDING, to be published this month, I again use characters and events inspired by history, primary among them Georg Ritter von Schönerer, the German nationalist whose right-wing rhetoric later influenced the young Hitler when he lived in Vienna (yes, I will include Hitler in an installment in due course). Schönerer is the inspiration for Christian von Hobarty, a primary suspect in the gruesome killings of several young women in the Austrian province of Styria, a place once much associated with vampirism. Indeed, the murders are for a time touted in the press as the work of a vampire. Damned handy that Bram Stoker, author of DRACULA, is in Austria on a speaking engagement and wrangles his way into the investigation with my ongoing protagonists, lawyer and private inquiries agent Karl Werthen and real-life father of criminology, Hanns Gross. Another intriguing—for me, at least—historical tip of the hat is to the so-called Blood Countess, Elizabeth Bathory, accused of killing hundreds of young women at her castle hideaway and bathing in their blood. Von Hobarty is an anagram of the Bathory name; he is, in fact, a distant relation of that infamous clan.

Berthe, Werthen’s wife and partner in crime detection, is—at the behest of Archduke Franz Ferdinand—meanwhile investigating a possible scandal with the breeding stock of the famous Lipizzaner horses, symbol of the Habsburgs. Her investigations eventually dovetail with those of her husband and Gross. But all is not history. Domestic life also plays an important role in these novels. Berthe and Werthen are suffering from a personal loss and Gross comes near professional ruin in his attempts to repair the strained relationship with his brilliant but drug-addicted son, Otto.

Your synopsis for A MATTER OF BREEDING is fascinating, especially your introduction of Bram Stoker as a character. Is he a major or supporting character in your story?

Supporting. The usual conceit of the books is to have one or more historical characters involved. Stoker, with his background in the courts of Ireland as a young man, demonstrates some skill at investigation, but it is his experience in the ring that makes him more valuable to the Werthen-Gross investigating team.

When writing about a real person, contemporary or historical, I imagine there is a fine line between accurate portrayal and creative license. Was there a lot of personal information about Abraham “Bram” Stoker available to draw on? How much of your Bram Stoker comes purely from your imagination?

There is quite a bit available on Stoker, especially in his role of business manager to the famed actor Henry Irving. I culled what I needed and then extrapolated from that. The hardest part about research is knowing when to stop. It is a rabbit hole with no exit signs, so you need to know when to put the brakes on. The lazy brain likes to keep delving; research is, after all, almost like writing, you tell yourself. Over-researching is just another form of procrastination, avoiding the empty sheet of paper.

You also have to make a decision somewhere along the line about truth to the historical record and truth to character as you see her or him. You have to just take a flyer. For me, who was a journalist and nonfiction author first, this is always a matter of Kierkegaard’s leap of faith. Trust what you know about the person, trust that you are not being facile, trust that you give a damn about other people’s lives and are willing to seek larger truths than those recorded by other historians. And don’t demean the person or trivialize her.

Once you have made that leap, there is no going back. This is a meta answer for your micro one; mea culpa.

I know writing serial novels presents a different kind of challenge from standalone novels. What unique challenges did this fifth Viennese Mystery pose for you?

Solace, not challenges. People write a series for a reason. Yeah, okay—because the readers know the name and buy the book, if you are lucky. But because there is also a sweet reconnection each time you go back to these old friends. The terror of the empty page is not as great.

The challenge is keeping it fresh. This is only book five for me in my series. I am at work on book six. I am thus a relative virgin in regards to series fiction, so I have yet to experience the sell-by-date factor that some writers with a dozen, two dozen titles in their series, must deal with.

Check back in a decade; I’m sure I’ll have more to relate.

Tell us a bit about your past work.

I started out writing journalism—travel and cultural pieces from Europe where I made my home for a couple of amazing (my nine-year-old would say “epic”) decades during the waning years of the Cold War. I was craven in my publishing interests, very conscious of turning easier to publish nonfiction into the gold ring (for me) of fiction. What did I know?

I hold no MFA; I started writing before I even started to read for pleasure. I published European travel books with an adventure/cultural/historical leaning (city walks, hiking, biking) and a Hitler bio before I had a major breakthrough when I met a big-hitter agent in New York city. A couple of over-sold, well-received yet under-purchased thrillers followed with Viking. Then Siberia for me for a while—advances that don’t earn out are the kiss of death in New York.

I kept writing, writing. The Vienna Mystery series took off once the albatross of the unpaid advances were forgotten or forgiven or deleted along with other pieces of life’s detritus such as ten-year-old tax records.

I’ve been at it a long time as a professional: before Word, before emailing the manuscript. I wrote early novel drafts by hand; typed a fair copy with carbon-paper copies; sent queries from Europe by air mail; mailed the full manuscript air mail as well when I could scrape up the money to do so, via land when I could not.

It’s a much different publishing climate we live in now. Forgive me for sounding like a curmudgeon, but it is much easier to call yourself a writer today with Smashwords, Amazon Digital, and multiple submissions via the tube machine.

I know this is not what you asked, but I thought it would be nice to start this discussion with folks who have been in both worlds as I have: pre-digital and digital. Learn by doing and living verses MFA land.

How do you feel A MATTER OF BREEDING compares with your past work?

With each new book of the Viennese Mystery series, I get to know my characters better. I also rely less and less on the ah-ha moments of six degrees of separation in the world of Vienna 1900. That hothouse culture is a fascinating subject for historians—all those amazing people in one city at one time: Freud, Klimt, Mahler, Wittgenstein, Schoenberg, Schiele, Krauss, Herzl, Schnitzler, Hoffmannstahl. The list goes on and on; modernism was born in Vienna 1900. I thought so as a young man; I still think so now.

However, as a fiction writer I feel less and less obliged to educate or promulgate. I am inspired by that time, not a booster of it. Not directly, anyway.

Those who know, care. Those who don’t, I want to entertain.

Every writer has a different creative process and rituals to get them in a writing mood. Do you have a special hat you wear? A magic coffee cup? Maybe a chant, or spinning three times counterclockwise?

I sit down and write. Every day. Anything else is procrastination. I neither beckon nor wait upon a fanciful muse.

I am an American who spent about two decades in Vienna. I speak, read, and write German, but never really developed a love for pleasure reading in the language. The British Council Library was my refuge during that time. I grew up on Hardy, Conrad, and Lawrence. Even my genre reading was Brit—everyone from Ambler to Deighton, Gerald Seymour, Frederick Forsyth, Follett.

Do you have anything new and exciting coming up that you can tell us about?

My stand-alone thriller, THE GERMAN AGENT, comes out in September in England, January 2015 here in the States. It’s an unabashedly old-fashioned ticking-clock suspense novel with a powerful romance at its center. It is also a full-blown re-creation of Washington, D.C., and the political/cultural life of America on the eve of our entrance into World War I. Here’s a quick synopsis:

February, 1917. A lone German agent is dispatched to Washington to prevent the British delivering a telegram to President Wilson—by any means possible. For this is the Zimmermann telegram: it contains a devastating piece of news that is sure to bring the United States into the war on the side of Britain and her allies.

Having fought in the trenches himself, Max Volkman knows that America’s involvement will only prolong the slaughter of innocents and is implacable in his determination to kill the British envoy carrying the telegram. But when his pursuit of the Englishman leads him to the home of American heiress Catherine Fitzgerald, wife to one of Washington’s most powerful politicians, he is presented with a terrible choice: loyalty to his comrades in the trenches or the loss of the one woman he has ever truly loved.

His decision will determine the outcome of the World War I.

Thanks for taking the time to chat with us, Mr. Jones. Best of luck with A MATTER OF BREEDING.

And thanks for having me. You folks at THE BIG THRILL do a hell of a service to the writing community. A large danke to you all.

J. Sydney Jones is the author of sixteen books of fiction and nonfiction, including five critically acclaimed installments of the Viennese Mystery series, THE EMPTY MIRROR, REQUIEM IN VIENNA, THE SILENCE, THE KEEPER OF HANDS, and A MATTER OF BREEDING. A long-time resident of Vienna, he currently lives near Santa Cruz, California.