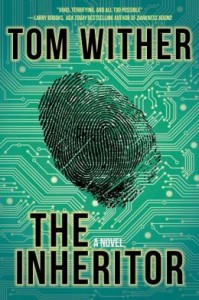 When you consider the recent NSA revelations, the Edward Snowden leaks, the 9/11 Commission Report, and other scandals, it’s been a tough decade or two for America’s intelligence communities. With over one hundred thousand people working in intelligence agencies across the U.S., there are bound to be individuals who get those agencies the wrong kind of media attention—as well as attention from the thriller writers seeking inspiration for an antagonist.

A former intelligence officer for the United States Air Force, Tom Wither wrote his debut novel, THE INHERITOR, to remind readers that U.S. intelligence services are filled with Americans serving their country with honor and patriotism. Wither characterized the current perception as frustrating: “As part of that frustration, I wanted to express the professionalism, the sacrifices, and the great work ethic that the vast majority of people in the intelligence business bring to the table.”

Now, before you think that Wither is using his novel as a platform to pontificate, hold tight. Wither will be the first to tell you that conflict and character are paramount. “It is a challenge to make sure that as I craft the story, I do so in such a way that I’m telling a good story, that I’m using modern-day technology, and that I’m showing what it’s like to live in the profession,” said Wither. He added that the need to compartmentalize his professional and personal lives helped as well, “When you sit down to craft a story, as a knee-jerk reaction, you don’t think about work. You think, ‘How can I build an exciting story? How can I have characters do things that will hold a reader’s attention and make (him/her) enjoy the ride?’”

In THE INHERITOR, Wither pulls back the curtain to the intelligence world “without violating my oath, exposing sources and methods, or putting people’s lives at risk.” There have been a number of novels written in the nearly a decade and a half after the September 11 tragedies. Readers will find few, if any, have Wither’s backstage access, or his philosophy on terrorism. “In a way, it is the new Cold War,” he explained. “This is not going to go away. It’s a generational problem.”

In THE INHERITOR, America’s most deadly enemy is still loose . . . and he’s ready to move. Following his dead mentor’s desire to re-establish the Islamic Caliphate, Aziz Abdul Muhammad, hand-picked by bin Laden himself, masterminds a series of attacks on the U.S. energy infrastructure that will reignite the war against the West. As his initial series of attacks creates mass panic, leaving the Northeast and Mid-Atlantic states in terrified darkness, the manhunt is on. In a unique special operations force, veteran intelligence officer David Cain, along with Air Force Sergeant Emily Thompson and rookie FBI Agent Dave Johnson, leads the U.S. effort to find Aziz and his operations expert. From Camp Delta in Guantanamo Bay to Chicago and the outskirts of Tehran, the force must halt Al Qaeda’s attempt to rise from the ashes of its former self—and stop “the inheritor” before the rest of his terrifying plan unfolds.

While it is safe to assume that protagonist David Cain is part biographical sketch, Wither wanted a broader hero for his story. Cain “is a seasoned professional. He is, in some ways, an amalgam of parts of myself. He’s also parts of other senior leaders I’ve worked with, and learned from, during my time in the [intelligence] community. I like his commitment to duty, and his interest in looking after his people.”

Wither also noted, in a moment that could be construed as art imitating life, that real-world intelligence teams and fictional protagonists share much the same mission. “You’re going to carry out an operation, and in some cases, it’s not successful,” explained Wither. “If it’s not successful, you don’t crawl back home, say ‘aw damn,’ and not do anything about it. You find a way to get the objective achieved. You reengage and you take care of that adversary any way you have to.”

As the base of David Cain fans builds, they will be pleased to know that a series is in development. Following THE INHERITOR, which Wither said ends reminiscent of the Empire Strikes Back, the next Cain-based thriller will give readers true insight into the nature and depth of Aziz’s mission and the unexpected ways it has to be stopped.

If you’re a fan of the military thriller, you will definitely want to check out Wither’s work. Especially, when you consider who Wither’s primary influence was. “I picked up THE HUNT FOR RED OCTOBER when I was in high school. I found the paperback version from Naval Institute Press…I read all of [Tom Clancy’s] books as they came out. That drew me to become a member of the intelligence community. And it’s a natural progression to writing a thriller.” No doubt, military thriller fans will agree wholeheartedly.

Tom Wither served his country for more than 25 years as a member of the Air Force’s Intelligence, Surveillance, and Reconnaissance Agency and its predecessor organizations. During his career, he served as an intelligence analyst at various locations in the world, including Japan and Saudi Arabia, and is a veteran of the Persian Gulf War. Mr. Wither holds professional certifications from the National Security Agency as an Intelligence Analyst, and the Director of National Intelligence as an Intelligence Community Officer. He lives near Baltimore.

Learn more about THE INHERITOR, as well as get Wither’s latest insights on the intelligence community and related news, on his website.