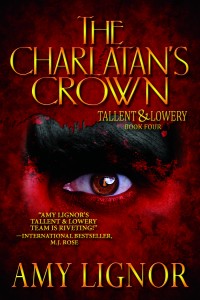 We’re very lucky to have Amy Lignor with us to chat about her writing and THE CHARLATAN’S CROWN, the latest release in her successful Tallent & Lowery series. Amy writes not only young adult and adventure/suspense stories, but also is Editor-in-Chief of Hallowed Ink Press, a new publishing house. She’s also a reviewer and ghost writer.

The daughter of research librarians, Amy has a love for books and information and claims that “if the New York Public Library would let me live in their basement, that’s where I would be.” She has put that love to use in creating books that meld historical locations with detailed puzzles.

Thank you again for taking the time to chat with us, Amy.

Prior to your writing career in action/adventure, you also wrote historical romance and young adult.  What made you make the jump into the world of mysteries and thrillers?

Although I definitely had something to say in the YA arena, I have always been extremely passionate about stories that are true “thrill rides”; stories that cause readers so much interest that they literally can NOT put the book down until they have completed that journey of excitement and adrenaline. Puzzles and historical data merged with thrills and chills is a formula I have always loved as a reader, so writing that formula is a whole lot of fun. Tallent & Lowery came about when a puzzle, of sorts, arrived in the most mundane way, but one small fact grew to mammoth proportions. Pouring over data and research, attempting to connect locations to others that readers would not have even thought could be connected in any way possible, is truly thrilling for me, which means the passion of the writing is incredibly strong.

THE CHARLATAN’S CROWN is the latest in the successful Tallent & Lowery series. Can you tell us a little bit about the novel?

The journeys that Tallent & Lowery have gone through have been so strange, with each new story completely different from the last. With THE CHARLATAN’S CROWN, Book #4, a new puzzle arrives that, again, is based on truth but readers will never have thought of it or seen it before. Here, the duo end up going to Paderborn, to a very famous and infamous locale that has been lived in by everyone from Charlemagne to Hitler’s “second,” Himmler. This is a castle that’s seen witches, gods, as well as being the “centerpiece” for a perfect world that some in the Nazi party wanted to build. Leah Tallent & Gareth Lowery head to Paderborn from Athens to retrieve something historical (once again, something very real, yet most people do not know about it). They must travel halfway around the world, become prisoners of some fairly nasty charlatan’s who want a very specific “crown” that only a very few have ever heard about. Leah also comes across a secret in her own life that she never even knew existed, which opens a brand new door to her past. So while the thrill ride is commencing, readers will also find out facts about their favorite headstrong librarian that will truly shock them.

You do a substantial amount of research for your novels and that must require a great deal of organization.  Are there are any tricks you do to keep all that information readily available?

Thankfully, I have a memory that truly helps me when it comes to this series. (It also helped me get through school.) I do a great deal of research, but the research “gene” was definitely placed in me by my mother who was a career research librarian. Where most households had TVs and Nintendos (God, that dates me; it’s X-Box now, right?), we had books. The library was the coolest place to me when I was a kid, and I literally craved learning about locations, cultures, and everything else that happened here way before I got here. Each Tallent & Lowery book is born from small facts I’ve discovered through research, and it is truly incredible when it comes alive in my mind. I also have a well-organized mess of notebooks.

I am both, actually. The plot has to come from a starting point, and that starting point gives me a chance to do research regarding what could be connected to it. But although I have a “loose” vision of where my characters are going, I really am shocked at times as to where they end up. There are so many links between things, it is amazing to discover new connections.

Do you have a favorite location for the novels in your series? How has that influenced the plot lines and characters in your stories?

I am a location addict. From the Acropolis to Cleopatra’s Mines to the Palace at Knossos, I am always floored by what existed and still exists around the globe. My absolute favorite place, however, is where the series all began—which is the NYPL. The New York Public Library is Leah Tallent’s “home.” It is her roots, and where she understands things the most. All of the facts, history, research, data—everything is right there at her fingertips. And she has that card catalogue brain that allows her to enter these dangerous situations, realize a red herring when she sees it, and be able to offer the eager reader something they didn’t know before. I love letters from readers who say they immediately rushed to their computers to see if I was telling the truth. And, sure enough, the facts were there. That’s what Leah Tallent and Gareth Lowery are all about and, I think, is the reason this series continues to be a whole lot of fun.

What are you working on now and what will readers have to look forward to in the future?

The Tallent & Lowery series is seven books total. Book #5, THE DOUBLE-EDGED SWORD, is in the editing stage at the moment. And I am working on a much darker novel that will be a completely different turn for me. Away from the action/adventure, this tale is aimed at the mysterious/frightening realm. Still a great deal of fun, but in a very horrific way.

“Amy Lignor’s stellar Tallent & Lowery series gets an adrenaline-charged boost with THE CHARLATAN’S CROWN. Her latest ups the ante in this continuing battle of good versus evil, adding a creepy Stephen King-like feel to the desperate quest of these two supremely appealing heroes who are all that stand between us and conquest by unimaginably dark forces. The latest and greatest in the best horror series being written today, as scary as it is scintillating.”
—Jon Land, bestselling author of “The Tenth Circle”

“Get ready for another fantastic roller coaster ride of fun and adventure from the series that just keeps getting better and better!”
—The Feathered Quill

“Lignor offers up a deliciously evil character; one all readers will hope appears again and again!”
—Night Owl Reviews

As the daughter of a career librarian Amy grew up loving books; ‘Patience & Fortitude’ at the NYPL are still her heroes. Beginning in the genre of historical romance with, “THE HEART OF A LEGEND,” Amy moved into the YA world where her first team from THE ANGEL CHRONICLES became a beloved hit. Moving into the action/adventure world with TALLENT & LOWERY, Amy has created a new, incredibly suspenseful, team that has once again exploded with readers everywhere. Born in Connecticut, Amy is now living in the bright sunshine of Roswell, NM, delving into her next adventure.

To learn more about Amy Lignor, check out her website.

Caridad Pineiro
New York Times and USA Today bestselling author and RITA® Finalist Caridad Pineiro wrote her first novel in the fifth grade when her teacher assigned a project – to write a book for a class lending library.Bitten by the writing bug, Caridad continued with her passion for the written word and in 1999, Caridad’s first novel was released.Over a decade later, Caridad is the author of nearly 40 published novels and novellas.When not writing, Caridad is an attorney, wife, and mother to an aspiring writer and fashionista.