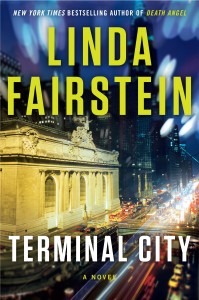 There’s a secret train station beneath the Waldorf Astoria, reserved for the President of the United States, and a dead young woman found there with train tracks carved into her skin—but who killed her isn’t the only secret lurking in the miles of dark tunnels stretching out from Grand Central Station.

TERMINAL CITY is the latest novel by Linda Fairstein to feature prosecutor Alex Cooper, and this is a case where the setting is truly a character.

The list of suspects couldn’t be larger. More than 750,000 people go through Grand Central every day: commuters and tourists, police officers and buskers. There are hidden basements, secret staircases, and six hundred people living deep underground, mole people with their own mayor.

So how do you find a killer hiding in plain sight among the crowds—or staying in the dark, emerging only to kill?

Linda Fairstein, like her hero, worked as a prosecutor, so she knows the same courtrooms and locations she writes about.

Here’s what she said about her latest novel, how she started—and how the adventures of Alex Cooper may end.

How is this novel different than what you’ve written before?

The challenge for any author writing a series is to make the experience seem fresh for readers who’ve been through the earlier books.  I think it’s important to have the characters evolve and learn from their past experiences, especially in a crime novel.

My protagonist, Alex Cooper, is a sex crimes prosecutor.  I’ve got to make her tough enough for the courtroom and mean streets, but let her grow a personal life apart from the violence she sees. So TERMINAL CITY shows Alex’s vulnerability as she struggles to balance her worlds with a changing relationship, and also takes us to an unexplored part of Manhattan that most folks aren’t even aware exists.

How has Cooper suffered, changed, and evolved from the first book to this latest novel?

In this sixteenth entry in the series, I like to think Alex has come quite a long way.  In the first book, FINAL JEOPARDY, she was much more naïve in her approach to the solution of the murder that opened the book.

She has taken a much more aggressive role, over time, in partnering with her NYPD detectives, and tries to establish a greater emotional distance from the victims she encounters. You can actually see and hear the evolution throughout the novels, even though I’m not sure Coop would call any of it “suffering.”

Have you noticed a difference in the villains you write about?

I give a lot of thought to the villains I’ve created in each of the novels, and use their differences to sustain interest in the plotting and development of the continuing characters.

I loved using a very un-typical villain in my first book (don’t want a spoiler here!) based on a real-life person I prosecuted—and nobody assumed that person’s guilt because of physical appearance.  I’ve done a few serial killers—it’s always the motive that I want to expose.  And the killer in TERMINAL CITY has his roots in some of the senseless crimes that have been high profile all over this country.  It’s hard work to create a strong villain, and great fun at the same time.

What attracted you to writing thrillers rather than non-fiction crime stories like Ann Rule?

I write thrillers because I love the genre.  I majored in English lit at a “fancy” women’s college [Vassar] in the sixties, and am still drawn to Trollope and Thackeray and Hardy.

But my father, whom I adored, introduced me to crime fiction as a kid and adolescent. It’s probably Nancy Drew who fostered my career in law enforcement, rather than in some kind of corporate legal job, and Nancy Drew, too, whose adventures seemed way too cool not to want to join in.  I read classics all the time, and will write more true crime one day, but I can’t get enough of really good thrillers and enjoy being on the shelves with writers whose works keep me up at night.

What’s changed about the business side of writing for you over the years?

First of all, when I started to write, I didn’t even give a minute’s thought to the fact that there is a business side to the book world.  I’ve always loved to write and pursued English lit with the dream of becoming a writer.

When FINAL JEOPARDY sold in 1995, I sort of had that giddy attitude of “You mean someone will pay me to do this?  What a hoot—I love to tell stories, I love to write books.”

Then things changed.  For me, I think the biggest shock was the effect on book stores.  I love bookstores and libraries, and it was painful to see my favorite shops have to close their doors and libraries shorten their hours.  And the ripples all across the industry—for jobs of all sorts at publishing houses—has been so dramatic and so dire.  Nobody likes getting paid less than they did, and it has hurt many of my friends.  I’ll always write—I think that’s what writers do.  But the business side of this creative endeavor has become a nightmare.

Which writers inspired in those English lit days, and how did your tastes change once you became author?

So my early crime fiction inspiration was Conan Doyle.  I was just transported by the brilliance of Sherlock’s deductive skills and the use of his knowledge and powers of observation to solve crimes.  “The Case of the Speckled Band” gave me nightmares many times over.

Poe was, of course, an early influence, too. I really enjoyed being scared out of my wits (“Tell-Tale Heart,” “Pit and the Pendulum”).  In both instances, too, it’s the great storytelling that kept me enthralled.  I’ve gone back to each of them many times and they all still hold up well. I love dense in my literary reads.  So I love Dickens and Hardy (that’s dark and dense, which is another favored combination) and Eliot. I am determined to read all of Anthony Trollope before I die.

I love being introduced to new talent, but these have been my literary loves and have never disappointed.

How have you handled a long series without packing along a heap of recurring characters, sidekicks, love interests, and villains who didn’t die off—or going the other route, like Lee Child’s Reacher, and sending your hero off to wander the planet?

I wrestle with this bear constantly. Sometimes a character comes out of left field, and I grow attached to him or her, and feel the need for a reprise. All my defense attorney pals criticized me early on for having so many stellar prosecutors and such sleazy opponents. So I created a silver-tongued lawyer who danced his way around Coop in the courtroom. When the book ended, I missed him—his thought process, his marvelous cadence, his talent.

So a few trials later, I brought him back. Unlike Reacher the Magnificent, my protagonist finds great comfort in the support of her friends and colleagues, so it’s necessary for her psychic well-being to have a posse of continuing characters to stabilize Coop—and my readers.

I’ve only done the continuing villain once.  I hate tying up all the loose ends tightly at the end of a story—it’s not real life.  This is truly a balancing act in every book.

How many times have you kicked yourself for (a) having a character die when they could’ve lived on to give Cooper a challenge, (b) wanted to give a villain redemption, or (c) been tempted to let a loyal sidekick or love interest become the villain?

I’ve never struggled too much with killing off a character on the theory that he could have come back to haunt Coop again.  Thirty years as a prosecutor taught me well that there will always be another one coming along to fill that gap—maybe even more interesting and with new, different techniques.

I couldn’t have dreamed up cybercrimes when I was a rookie district attorney, before the Internet highway was up and running.  The bad guys seem always to be one step ahead.

The idea of redemption is tempting. I’ve tried to go there once or twice. And I started the series with a love interest who not only betrayed Coop’s personal trust, but also became a murder suspect.  It’s great fun to play with the familiar, and even in TERMINAL CITY I think Alex’s vulnerability is revealed because her detective-partner and best friend is caught in a huge lie/betrayal of trust.

What’s your vision for the end of Alex Cooper’s adventurers? Think you’ll keep it open-ended or bring things to closure? It’d be interesting to hear your take on how Arthur Conan Doyle tried (and failed) to kill off Sherlock Holmes, while Agatha Christie successfully killed Hercule Poirot in a final story where the great Belgian detective turns out to be the killer.

The “end” of Alex Cooper’s adventures? I can’t bear to think about that!

It’s very funny because my protagonist is very much my professional alter ego. I have often said that Coop is younger, thinner, and blonder than I am. So now she’s just thirty-eight years old (sixteen books in), with a full life and fascinating career ahead of her.

I can’t imagine the thought of “killing off” someone who reminds me in so many ways of, well, me.  So far, I have no idea how or when the series will end, and I think readers play a huge role in that decision.  For now, the game is afoot and she loves every minute of it. So do I.

Linda Fairstein is America’s foremost legal expert on crimes of sexual assault and domestic violence. She led the Sex Crimes Unit of the District Attorney’s Office in Manhattan for twenty-six years. Her fifteen previous Alexandra Cooper novels have been critically acclaimed international bestsellers, translated into more than a dozen languages.