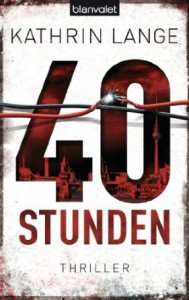 Germany is moaning under the summer temperatures and Berlin is humming with activity as tens of thousands of visitors from all over the world gather to attend a church congress to which the Pope is expected.

Faris Iskander, a detective in the Special Unit for Religiously Motivated Crimes, is still reeling from a bombing in a city museum that occurred ten months earlier and which left him scarred physically and emotionally. Faris’s girlfriend recently dumped him and is about to start a family with another man and he has just been suspended for getting into a fistfight with a neo-Nazi. Things could be better for Faris.

But his personal problems fade into the background when he gets a mysterious message on his phone that makes his blood freeze—and it isn’t the first time he has received it: “As-samu alaikum, Faris”. May death be with you. The last time he heard these words, a bomb went off shortly afterwards, killing seventy-five people and leaving Faris severely injured. And once more, the message is the beginning of a nightmare. It comes with a video of a man being crucified and a task for Faris: he has forty hours to find the victim shown in the video—or the man will die and several bombs deposited all over Berlin will go off. To make his point, the sender blows up a train in a busy underground station. As Faris feverishly tries to track down the author of the video, he gets help from online journalist Niklas Hesse. When Niklas publishes a photograph of the victim, the man on the cross can be identified as a religious fanatic. The culprit, on the other hand, always seems to be one step ahead of Faris and Niklas in the course of their investigation.

The only clue they have is the mysterious video message which seems to be a link between the current threat and the man who was responsible for the bombing in the museum months ago—a man who was believed to be dead. And Faris starts to realize that the bomber might be closer to him than he initially thought…

This is the first adult thriller for Lange, who has previously published historical and young adult fiction. “I’ve always been a fan of crime novels and thrillers and I devour them by the dozen,” noted Lange. “American authors in particular have fascinated and, I admit, inspired me: from Chandler to Robert B. Parker, Dennis Lehane, James Patterson, and Nelson DeMille, whose characters were a revelation to me. Even in my earlier historical novels I always included elements of suspense. So writing young adult thrillers was but a slight detour, and when I had the idea for Faris Iskander, the decision to write an adult thriller was an easy one.”

Her protagonist, Faris Iskander, is not your usual detective: he’s a Muslim investigating for a fictional Special Unit for crimes with religion-based motives. And it took Lange over a year to fully develop him. “I didn’t imagine him as being Muslim initially. But then I realized if I gave Iskander a migration background the character would have a greater depth. And I found that this aspect induced the most intriguing question about him: how does someone whose job it is to protect people from fundamentalistic threats deal with the fact that he himself is often mistaken for a suspect? I like characters who are dedicated to a cause that matters to them, as Faris is—even way beyond his own limitations. He has his standards and his inner rules which he follows, no matter what.“

Infusing her story with religious fanaticism was not only a plot choice but first and foremost a matter of personal interest. “I’ve always been interested in learning about fundamentalism, in whatever religion, and I consider it one of the biggest challenges the Western world is facing right now. So that is the motivation behind 40 HOURS. Aside from wanting to write a thriller that will keep people awake reading all night, of course.“

And what made Berlin the setting of choice? “I just think Berlin is the coolest city in Europe right now. It has a vibrant literary and cultural scene; and even more than twenty years after the wall came down, it’s still full of interesting and wonderful contrasts. So I simply couldn’t help but use it as the setting for my novel. Little did I know when I decided upon Berlin how much this choice would influence my further writing and research process. You see, in Germany it is difficult to get reliable insider information about police work. And the fact that in Berlin, due to its history, everything is done a bit differently, made research even more tricky. When speaking to police insiders who work outside of Berlin, I usually got the same answer: ‘Well, this is how we do it here… but Berlin is a whole different story.’ For example, I was surprised to learn that Berlin has no less than eight permanent homicide divisions; they’re usually created and reassembled as required for specific cases. Inventing one more unit in my novel—the Unit for Religiously Motivated Crimes—has been a lot of fun.“

THE BIG THRILL always enjoys covering thrillers from our international members, so we hope readers will check out the fascinating international page-turner, 40 HOURS.

Kathrin Lange was born in 1969 and lives in Northern Germany. After passing the Abitur and training to be a publishing bookseller, she spent some time working at a theological bookshop. When her children were born, she founded her own media design company. From 2002 to 2004, she published the author’s magazine FEDERWELT, and since 2005 she has been writing novels. Her exciting thrillers are published by Blanvalet and Arena. Kathrin Lange is deeply committed to the promotion of reading. She also works as a novel writers’ coach, and in addition to the International Thriller Writers, she also is a member of the leading German crime-authors organisation SYNDIKAT.

To learn more about Kathrin, please visit her website.