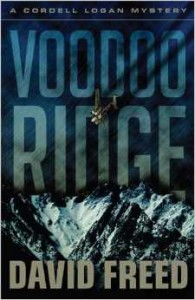 As an Pulitzer Prize-winning investigative journalist, most notably with the Los Angeles Times, David Freed counted among his acquaintances con men, commandos, spies, people who get paid to solve homicides, and people who commit them. He chronicled affairs of state, all manner of disasters, both natural and manmade, and the activities of the U.S. military, including Operation Desert Storm, where he reported from Saudi Arabia, Kuwait, and Iraq.

This month THE BIG THRILL is happy to bring you a chat with David Freed about his writing and the release of the latest work in his Cordell Logan series, VOODOO RIDGE.

Happy to, Basil, and thanks a bunch for the opportunity. VOODOO RIDGE is the third offering (following FLAT SPIN and FANGS OUT) in my Cordell Logan mystery series. Logan is an acerbic former Air Force fighter pilot-turned-government-operator-turned-civilian-flight-instructor eking out a living in the seaside resort community of Rancho Bonita, California. He is also, despite himself, hopelessly in love with his ex-wife, Savannah, who also happens to be pregnant with his baby. When the book begins, Logan and Savannah decide to fly to Lake Tahoe in Logan’s old Cessna 172 to retie the knot. Along the way, Logan spots a glint of metal high up in the Sierra Nevada Mountains that may or may not be the remains of a downed airplane. He agrees to put his wedding plans on temporary hold and guide authorities to the site—a decision that will change his life forever.

Cordell Logan is an interesting character—complex, serious, funny, tough, and much more. What inspired you write such a character? Is he based on a single person or an amalgamation of individuals you have known in real life?

Someone once said that every character ever conceived by an author is, in one way or another, the author. I wouldn’t begin to suggest that Logan and I are one in the same—he gets to do and say things I can only dream about—but I have traveled, at least peripherally, much of the same path he has. We’re both enthusiastic pilots. We’ve both earned our keep witnessing the worst in human beings (he as a trained assassin, I as a journalist). We’ve both worked within the intelligence community. We also reside in upscale beach towns virtually identical to each other. So, abiding by that old truism, “Write what you know,” I decided when I set out to pen my first novel to explore worlds in which I had experience, worlds that I felt comfortable in. Are there elements of me in Logan? Probably. But he’s really very much an amalgam of some amazingly bright, courageous, and funny guys I’ve had the pleasure and honor of meeting over the years and, in some cases, befriending—men whose shoes I couldn’t even begin to fill.

You are a pilot and in all three of your novels small aircraft play a big part of the story. What got you interested in flying, and in writing about characters who fly?

My dad was in the Air Force and I was born in an Air Force base hospital (it’s now a brewery). That likely had something to do with my love of all things aviation-related. I also was enamored of stories growing up that my father would tell about a much-admired cousin, a B-17 co-pilot, shot down and killed in action over France, just before D-Day. Guys like that, who took to the skies knowing their chances of survival were slim but who went up anyway, day after day, are, for me, the epitome of heroes. When I fly my plane, I feel as if I’m honoring their memory and, in a small way, their courage. Aside from the historical influences, there’s something ethereal about flying to which all pilots become addicted: the beauty and perspective it affords. Leonardo da Vinci said, “For once you have tasted flight you will walk the earth with your eyes turned skyward, for there you have been and there you will long to return.” Old Leo definitely had it dialed in.

Cordell is described as a “would-be Buddhist.” Can you explain what that means?

He sees great merit in Buddhist philosophy, which is basically the Golden Rule. The problem is that it can be big existential challenge to abide by a religion that espouses values of do-no-harm when your own impulses, both by instinct and training, gravitate toward violence. It’s also virtually impossible to practice a religion that advocates a meatless diet when you yourself are addicted to chile verde burritos.

According to your bio you’ve been around people and places few others have or ever will be around. Can you describe what the differences are between what we see in fiction, both well written and poorly written, versus the reality of the exciting people & places you’ve experienced?

Regardless of how many cool places you’ve seen, if you’ve been around long enough, the one thing you learn is that the world is a panoply of gray when it comes to human behavior. Rarely is a person purely good or evil, loving or vengeful, brilliant or moronic, happy or sad. Each of us can exhibit any and all of those qualities by degree depending on circumstance and at any given moment. Yet you’d never know that reading a lot of modern fiction. Often, it seems as if there’s almost a dismissiveness when it comes to delving into the emotional ambiguities of a protagonist or antagonist. The good guy is always good even when he’s doing bad stuff; the bad guy is always bad even when he’s not. That bothers me. People are invariably conflicted. They’re not one way; they’re many ways. I’ve sat down with convicted psychopathic killers who, if you didn’t know any better, you’d swear were among the nicest people you’d ever met. I’ve known highly decorated cops who you wouldn’t trust in the same room with your sister. My point here is that humans are emotionally complex. We have an obligation to our readers to convey that complexity in the stories we craft because it’s the truth; and truth, after all, is the foundation upon which all good mystery-thrillers are built.

And finally, the deep-seated, spiritual, ultimate-truth-of-the-universe question that everyone is aching to know. You are abducted by aliens and taken to their planet to save their race from extinction by a force of invading monsters called the “Puffy-Wubblies.” After you demonstrate the science of marshmallow toasting as a life-saving measure, they vow to return you to your home planet but their worm-hole machine is broken and they can only guarantee you the choice of general fifty year periods of history prior to or after your abduction (but it cannot be within six-months of said abduction; the machine is weird that way). What time period would you choose to return to, if any, and why?

This actually happened to me exactly fifty years ago! I requested that I be transported back to the year 2014 so I could participate in this Q&A. No? You don’t buy that? Okay, fair enough. Look, this is really a very easy question to answer: of course, any prudent human being would want to come back in the second half of this century. By then, scientists will most certainly have figured out how to thaw Ted Williams’ cryogenically frozen head and return him to lucidity so everyone can gain his timeless insights on sport fishing and the evils of baseball’s free agency rule. No longer will Saran Wrap stick to the f*cking roll and get all twisted up when you’re trying to tear off a piece to cover the leftover meatloaf. Also, women by then will be able to read their husbands’ and boyfriends’ minds instead of asking incessantly the question that has plagued male-female relations since the beginning of time: “What are/were you thinking?” But that won’t be the best part. The best part is that, finally, dogs will be in charge of everything. The world will be a much happier place. 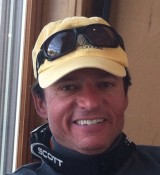 David Freed is a screenwriter, instrument-rated pilot, and former investigative reporter for The Los Angeles Times, where he shared on a Pulitzer Prize. He has worked extensively within the US intelligence community and is a frequent contributor to national magazines, including The Atlantic, Pacific Standard, and Smithsonian’s Air & Space.