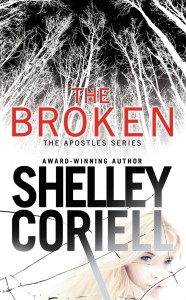 Author Shelley Coriell’s latest novel, THE BROKEN, kicks off the first in a new exciting series featuring an elite team of FBI agents known as The Apostles.

Three years ago, reporter Kate Johnson was the first victim—and only survivor—of the Broadcast Butcher. Scarred both physically and psychologically by the brutal serial killer, Kate lives life on the run, knowing that one day, he will find her and finish what he started.

Agent Hayden Reed spends his life chasing monsters. The only way to stay sane is to detach, but the second the Broadcast Butcher case crosses his desk, Hayden knows this is the case that might just cost him his soul. To catch this vicious murderer before he strikes again, Hayden must find Kate and earn her trust. For it’s her darkest secrets that hold the key to stopping this madman once and for all . . .

I recently checked in with Shelley to learn more about The Apostles and the world they inhabit.

Who are the Apostles? Can you give us a little insight into their world?

The Apostles are members of an elite FBI team not afraid to work outside the box, and at times, outside the law. Led by legendary FBI Agent Parker Lord, now wheelchair-bound and living in seclusion in Northern Maine, The Apostles take on America’s vilest criminals, using the most powerful weapons known to mankind, the human mind…and heart. Parker Lord on his team: Apostles? There’s nothing holy about us. We’re a little maverick and a lot broken. But in the end, we get justice right.

Where did the idea for The Apostles come from?

From the hospital bedside of my dying father. In 2007 my father had what he thought was a mild stroke. Fiercely independent and a tad bit cantankerous, he checked himself out of the hospital. The next day, he hopped on his quad, went for a drive in the woods, and drove off the side of a mountain. His chest crushed, he was life-flighted to a large urban hospital where we learned he’d had multiple strokes and serious lung trauma and would forever be dependent on others. His body and spirit broken, my dad told me he wished he’d died on that mountain.

Crisis time, which in my world, meant story time, because a good story makes everything better. Right? I hauled a heavy hospital chair to my dad’s bedside and told him I had a hazy idea for a book about a bunch of broken people—probably FBI agent types—who fight evil. Dad glared at me. I kept talking. Eventually, he succumbed to the lure of a good story. Two hours later, Dad and I finished brainstorming the first Apostle book, a story about broken people who find hope and healing through love.

THE BROKEN kicks off this new series. Did knowing that other stories were coming present any interesting challenges for you when creating this story?

The only challenge was choosing which Apostle story to tell next. All of the Apostles have strong pains and passions and fascinating pasts. Hatch Hatcher, the team’s smooth-talking crisis negotiator and Southern charmer, spoke the loudest, and his story is featured in Apostles Book number two, THE BURIED.

What elements do you feel are essential for good a dark / suspense story?

A great villain. Villains must be passionate about their causes, have some redeeming qualities, and be equal matches for our heroes. After all, villains are the heroes of their own stories.

In addition to romantic suspense, you’ve also written for young adult audiences. Can you tell us a little about those works as well?

I write smart, funny stories for teens. These stories are atypical YA books about strong young women trying to navigate first love and finding their place in the world. Like my Apostle books, they are very much stories of hope and the healing power of love.

Thank you for speaking with THE BIG THRILL.

Shelley Coriell is an award-winning author of romantic suspense and novels for teens. Her debut YA,Welcome, Caller, This Is Chloe, was a 2012 Indie Next Pick and Publishers Weekly praised her for  her “sparkling wit and great skill in creating complex characters with memorable personalities.” A six-time Romance Writers of America Golden Heart Finalist, Shelley’s new romantic thriller series, The Apostles, will debut in April, 2014 from Grand Central Forever. Shelley lives in Arizona with her family and the world’s neediest rescue weimaraner.

To learn more about Shelley, please visit her website.