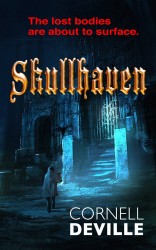 Skullhaven Cemetery is an old and lonely place. Inside the rusting wrought iron fence, lost spirits wander through the mist until they move on—if they can. Across the highway is the Sacred Heart Orphanage, where Lilly has lived for seven years now, ever since her mother mysteriously disappeared.

Shortly after Lilly arrived, Sister Carmen gave her a gold cross to protect her from evil. Lilly has recently discovered that the cross she wears is enchanted, because she’s suddenly able to see the spirits that are waiting to cross over.

When a ruthless Egyptian antiquities dealer visits the orphanage and recognizes Lilly’s cross as the priceless Golden Ankh of Nefertiti, he decides he must have it for his collection. After giving Lilly his ultimatum—either part with the Golden Ankh or spend eternity in Skullhaven Cemetery—Lilly must summon her inner strength. If she gives up the ankh, the lost spirits of Skullhaven may never find their way home.

SKULLHAVEN is available from Amazon.

Skullhaven is Cornell DeVille’s latest offering. Written with the upper middle-grade reader in mind, Skullhaven is a fun adventure with a hint of history, a bit of mystery, and a lot of complexity that will keep readers of all ages wondering—what’s going to happen next!

Cornell DeVille considers himself an Imagination Director. A member of the Baby Boomer generation, DeVille was influenced by the state-of-the-art technology of the fifties—television—and the great storytellers of the day, including Hollywood icons like Walt Disney, Alfred Hitchcock and Rod Serling. Rather than spending his summer days outside playing baseball, Deville preferred the world he could find within the covers of a good book. At an early age, he fell in love with the works of Jules Verne, Edgar Allen Poe, Robert Louis Stevenson, and H.G. Wells.

Those nostalgic memories remained with him throughout the years and continue to influence his writing today. A lover of adventure, mystery, and fantasy, DeVille’s writing leads the reader on a journey that allows them to escape the real world and venture into a special realm where anything can happen. His current adventures include Lost in the Bayou, Cannibal Island, Star Wishes, and The Treasure of Morro Bay.

DeVille grew up in the Kansas City area, where he lives today with his wife Rosie, their bichon-poodle Hannah, and a Himalayan Persian cat named Billy. You can find him on Twitter as cornelldeville1 and on Facebook as Author Cornell DeVille.