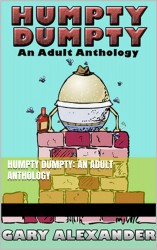 HUMPTY DUMPTY: AN ADULT ANTHOLOGY is available from Amazon and Kobo.

Gary Alexander has written 14 novels, including GOLD, fifth in the mystery series featuring comic Buster Hightower. It appeared in December 2013.  DISAPPEARED, the first in the series, has been optioned to Universal Pictures.

He’s written 150 + short stories and sold travel articles to 6 major dailies. DRAGON LADY, his Vietnam novel, is being published by Istoria Books, available both as an eBook and print-on-demand. His website is www.garyralexander.com.