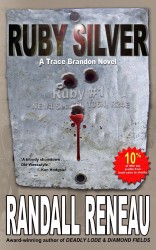 Geologist Trace Brandon and his partner Will Coffee are just back from Liberia, West Africa. Cashed-up and looking for a new venture, they once again team up with Cyrus “The Virus” McSweeny. This time the quarry is the silver-rich ore of the old Ruby Mining District. And this time they’ll not only have the Pantelli crime family to deal with, but also lumberman Autry Ollinger—three hundred pounds of obnoxiousness whose preferred method of negotiation is a right hook. When the Pantellis unleash a bizarre extortion plot to seize control of Ruby Mining Company, Cyrus is forced to bring former clandestine operative Marion Thistlewaite out of retirement. Marion’s unique expertise may give them the edge they need to hold on to their company . . . and their lives.

RUBY SILVER is available from Amazon.

“If Robert Louis Stevenson was from Texas, his name would be Randall Reneau.”
—-Kinky Friedman

RANDALL RENEAU is a Vietnam veteran and former international geologist. He is the award-winning author of three “Trace Brandon” novels: Deadly Lode, Diamond Fields, and Ruby Silver. And the soon to be released, Hardin Steel novel, South of Good. He lives with his wife, Lynne, in Austin, Texas.

The Quiet Game by Marcus Brown