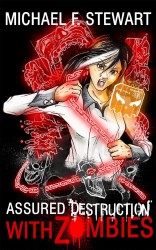 The final book in the Assured Destruction series!

Jan Rose may already be expunged from the police department’s High Tech Crime Unit. Her mother’s hospitalized, and Assured Destruction’s on the cusp of bankruptcy. But Jan doesn’t wait on anything, she seeks out the customers who used to keep the family business afloat. That’s when everything starts to go wrong.

A computer virus–aka the Zombie Worm–threatens not only her school and Shadownet, but the entire city. A skull with a chain running through its socket links a powerful gang to her former customers, and holds the secrets to why her father left and the identity of her mother’s boyfriend.

To save her family and the business, Jan must determine who is friend and who is foe. And decide what type of hacker she wishes to become: Gray, white, or black. Not only her life hangs in the balance.

ASSURED DESTRUCTION: WITH ZOMBIES is available from Amazon and Kobo.

“Veronica Mars combined with the techno-geekdom of Birkhoff from Nikita,” the Plot Thickens’ review.
“…you can bet I’m going to be the first to buy the next book. This is the series to watch … Five avatars out of five!” Sammy the Bookworm.

“Assured Destruction is a must read for those looking for a fun, suspenseful and original YA read. Stewart is one hell of a storyteller.”  Offbeat Vagabond.

Michael F. Stewart is the author of the Assured Destruction Series, which sprawls across 3 books, 2 websites, 1 blog, 7 Twitter accounts, tumblr, Facebook, and 6 graphic origin stories. He likes to combine storytelling with technology and pioneered interactive storytelling with Scholastic Canada, Australia and New Zealand’s, anti-cyberbullying program Bully For You. He has authored four graphic novels with Oxford University Press Canada’s award winning Boldprint series. Publications of nonfiction titles on Corruption and Children’s Rights published by Rubicon Publishing as well as early readers with Pearson are all forthcoming in 2014 and 2015.

For adults, Michael has written THE SAND DRAGON a horror about a revenant prehistoric vampire set in the tar sands, HURAKAN a Mayan themed thriller which pits the Maya against the MS-13 with a New York family stuck in the middle, 24 BONES an urban fantasy which draws from Egyptian myth, and THE TERMINALS—a covert government unit which solves crimes in this realm by investigating them in the next. This series has already been optioned for film and television.

Herder of four daughters, Michael lives to write in Ottawa where he runs free writing workshops for teens and adults. To learn more about Michael and his next projects visit his website at www.michaelfstewart.com or connect via Twitter @MichaelFStewart.