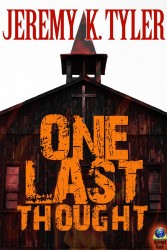 Oso Boyer might be considered a poster boy for good cops, but every man has his breaking point. For him, it’s the point where his family is put in danger. What starts out as an arson and murder investigation turns into something much more, and while Boyer is trying to piece together all the various clues, someone is stalking his sister and nephew. It’s a journey into a world Boyer never knew existed, and he just might not make it out alive.

ONE LAST THOUGHT is available from Amazon and Untreed Reads.

Writer, cook, stay-at-home-dad: Jeremy K Tyler makes his home in upstate New York with his wife, son, and three dogs. He fights the monotony of 8-month-long winters by reminiscing about growing up in Florida, and writing. You get to enjoy the result.  While other kids heard bedtime stories with kittens and bunnies, he heard about mobsters, pirates, and near-insane socialites. You get to enjoy the result of that, as well.  One Last Thought is his fourth novel.