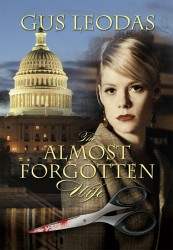 Madge’s husband and daughter share secrets that exclude her. Exempt from the family mystery she is an outcast, ignored, and treated as nothing more than a house item, a part of the furniture, and a houseplant thirsty for water.

Madge Kiley’s daughter is on trial for killing her rapist in self-defense.  Madge’s husband is a United States senator.  The daughter’s truth will destroy the senator’s career and send the daughter to prison. Her lawyer abandons her trial.

The daughter’s new attorney asks Investigator Mitchell Pappas to help with a case filled with obsessive love and hate that surge the plot to its unexpected conclusion.

#6 in the Award Winning Mitchell Pappas Mystery/Thrillers and other novels by Gus Leodas.

THE ALMOST FORGOTTEN WIFE is available from Amazon and Barnes & Noble.

Gus Leodas is an award winning and best seller author who writes about strong women, good or evil.  He is member of ITW, MWA and DGA.  He is also the author of The Devil Walks Beside Her, The Letter From Magda, A Sorority of Angels, Huntress, Unsafe Harbor, and The Forgotten Mission – a WWII Cold Case Mystery.
His background includes a creative advertising service and a film production company in New York City (more than three-dozen awards).