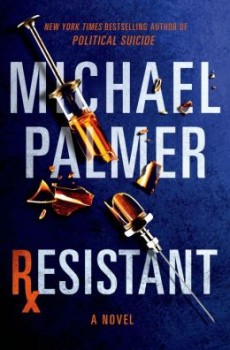 Sadly, Michael Palmer, a wonderful writer, a pioneer of the medical thriller genre, and a revered member of the International Thriller Writers, passed away last October. Friends and colleagues of Michael universally praised his transcendent writing ability, his philanthropy, his sense of humor, and his willingness to mentor fledgling writers.

In Michael’s most recent book, RESISTANT, ER physician and professional counselor Dr. Lou Welcome must track down a kidnapped scientist in an effort to halt the spread of the aptly named Doomsday Germ. The shadowy Society of One Hundred Neighbors, a fringe group composed of some of the richest and most powerful people in America, developed and released the deadly bacteria. Their goal: eliminate what they see as the suffocating government programs of entitlement. Their means: meet their demands and they’ll provide the cure for the germ. But the Doomsday Germ proves too effective, becoming resistant to treatment and threatening America with an epidemic that will cause incalculable suffering and unprecedented loss of life.

Michael’s son, Daniel Palmer, graciously agreed to answer some questions about Michael and the novel.

RESISTANT explores bio-terrorism and the use of antibiotic resistant bacteria as a weapon of mass destruction. Was there any specific real-life development that triggered Michael’s decision to explore this idea?

My dad had a saying he made up and cited often. Finding what to write about is a little bit like following a recipe for rhinoceros stew that starts: Step one, find a rhino. He always looked for big ideas that could serve as a backdrop for his thriller novels. When he decided his “rhino” for RESISTANT would be a drug-resistant bacteria that had been weaponized by domestic terrorists he needed to figure out what that bacteria would be. He had read about the story of Aimee Copeland, the 24-year-old Georgia woman who waged a two-month battle against flesh-eating bacteria, and thought that would make for a terrifying terrorist threat.

The protagonist of RESISTANT is medical doctor Lou Welcome. He’s smart, loyal, compassionate, courageous—and flawed. What do you think drew Michael to the Welcome character?

Lou Welcome is my father’s first series character. Prior to the introduction of Lou in OATH OF OFFICE, my father always wrote stand-alone thrillers. His stories never involved detectives—law enforcement types who had a built in reason to seek out a story via crime solving. In my father’s stand-alone thrillers, something extraordinary would always happen to the protagonist to propel them into the story. But there is a limit to the number of times an ordinary person can encounter extraordinary circumstances without being a detective of some sort. My dad always wanted to write a continuing character, but didn’t know how to work one into his typical milieu. For much of his writing career, my father worked as an associate director of the Massachusetts Medical Society’s Physician Health Services, a nonprofit organization that provides doctors with confidential mental health and substance abuse help. At this second job, my father encountered all sorts of people with a variety of personal and professional problems. He got the idea that a doc similar to himself could in a way be like a detective trying to help these people with their various problems. Of course, their problems would be big enough to fill a novel.

In his quest for a cure for the killer bacteria, Welcome has to overcome health-care bureaucracy and scientists’ egos. Do you think that reflected any of Michael’s views on the current state of the health care system?

As a doctor, my father encountered his fair share of egos, something that never appealed to him. And he’s certainly made mention of his views on bureaucracy in health care in novels like THE SOCIETY. My father never viewed himself above his patients and for this reason he was truly loved as a physician by those he cared for and those he worked with. He would always go the extra mile and do whatever tests he thought necessary. He would advocate for his patients even against the insurance companies. But egos and bureaucracy aside, my dad loved being a doc, and he would have stayed in the ER and written novels if he had the time to do both.

No, not at all. I don’t know of any group as radical as 100 Neighbors. If you look at a political movement such as the Tea Party their core beliefs center around government bloat, independence, and reduced spending. But they would not condone the abandonment of citizens as 100 Neighbors would. In a way, 100 Neighbors wants what all parties want—a strong country, with a growing economy, and a thriving populace. We’ve seen with our current political system how the means to achieving these goals can be quite diverse. 100 Neighbors was intended to be extreme and highly provocative example of an issue that pre-dated Roosevelt’s New Deal.

Lou Welcome works as an emergency room doctor, but also counsels physicians with physical illness, mental illness, and drug abuse problems. Why is that second job so important to Welcome?

Because it was so important to my father. My father believed in the importance of being of service to others. Aside from his family, that’s what gave his life shape and meaning. His work with the Mass Medical Society meant the world to my dad. He made a real difference in the lives of others and if my dad was going to live with a character through the course of several books he wanted that creation to embody his core values. Over the years, my dad had received a great deal of advice about writing from his parents, friends, agent, editors, and the other writers he crossed paths with along the way. His outlook on both work and life ultimately came down to four principles. You can only do what you can do. Live one day at a time. Never go around comparing your insides to everyone else’s outsides. Being a good person supersedes everything else. I think Lou Welcome adheres to these principles, as well.

Other than Welcome, who is your favorite character in RESISTANT?

I think Humphrey is the most interesting secondary character. Humphrey is a pharmacy technician, who has severe cerebral palsy and difficulty speaking to the point where people often shut off before realizing that he is highly intelligent. Lou has no such difficulty and at one point even says how much he admires Humphrey for the spirit that shines through everything he does. This character resonated with my father who often saw the special spirit in everyone regardless of any mental or physical disability. This is what made my father such a beloved mentor at the Mass Medical Society.

Your most recent novel, DESPERATE, which received a starred review from Publishers Weekly, was released this April. What influence has Michael’s writing had on your own writing?

A HUGE influence. My father encouraged me to write a short story with him that later was published in ITW’s first anthology edited by James Patterson. From that moment on, I was part of a larger community of writers, even though I hadn’t sold a novel of my own. As my career progressed, my dad was always there to dispense advice. He shared lessons he learned over many years honing his craft about plotting, character development, and pacing…always pacing. But the three biggest lessons I learned from my dad were: be fearless, relax, and this is hard. I have those words taped to my wall and I look at them every day.

Your brothers also are writers. Do you all consult one another about writing and the writing business? If so, would you describe that process?

My father, my brother Matthew, and I all have the same agent—Meg Ruley of the Jane Rotrosen Agency. But from my experience (and Matthew’s as well) there haven’t been too many business decisions to make. You write a book and then, if you’re fortunate enough to get an offer, you and your agent decide to take it or not. The publisher makes most of the business decisions—jacket design, marketing, PR, distribution, publication date and such. This gives us time to focus on the most difficult part of the business—writing great books. For that, we all rely on each other. My brother Luke is a brilliant playwright and theater producer. He’s got great story instincts. Matthew is a genius with the MacGuffin among other things. The MacGuffin is really the why of the plot and Matt is so logical that sometimes my dad would consult him! No wonder Matt’s book THE AMERICAN MISSION (Putnam, June 2014) received a starred review in Kirkus and another rave from Booklist so far.

Who were some of Michael’s favorite writers? Did they include any NON-thriller/mystery writers?

My dad’s two favorite thriller novels were MARATHON MAN by William Goldman and SIX DAYS OF THE CONDOR by James Grady, which Hollywood shrunk down to just three days. He was also a big fan of John D. MacDonald and Robert Parker. I remember there always being Travis McGee and Alistair MacLean novels lying about.

If you had to name the best piece of writing advice Michael gave you, what would that be?

Readers won’t care what happens next if they don’t first care about the characters.

What’s the one thing you’d want readers to know about Michael.

The New York Times wrote an excellent tribute to a life well lived. 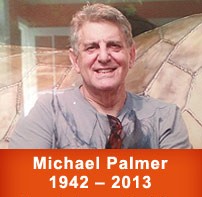 Michael Palmer, M.D., is the author of seventeen novels of medical suspense, all international bestsellers. His books have been translated into thirty-five languages. In addition , Palmer is an associate director of the Massachusetts Medical Society Physician Health Services, devoted to helping physicians troubled by mental illness, physical illness, behavioral issues, and chemical dependency. Michael passed away in October 2013, at the age of 71.