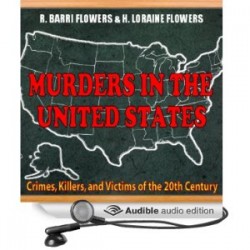 From the assassination of President William McKinley on September 6, 1901, to the mass killing at Columbine High School on April 20, 1999, the 20th century saw many murderous events that are difficult to contemplate but have become a part of the national history. This reference book is divided into three parts. Part One, arranged chronologically, details 53 of the most famous murder cases of the 20th century in the United States. In Part Two, over 300 entries (alphabetically arranged by criminal) provide descriptions of crimes and are subdivided into male, female, and juvenile murderers; pair and group murderers; hate crime murderers; and school killings. Part Three features crime events related to over 40 selected victims. Cross references guide the reader to additional information. An index is included.

MURDERS IN THE UNITED STATES is available from Amazon and Audible.

“A balanced body of information about delinquents, their crimes, and the role of the juvenile justice system in creating “delinquency” and trying to combat it.” –Book News on THE ADOLESCENT CRIMINAL

“This extensively researched manuscript has over 700 citations, 22 figures, and 3 tables, making it a valuable source of information for researchers and specialists.”–-Choice on RUNAWAY KIDS AND TEENAGE PROSTITUTION

“An indispensable sourcebook for anyone interested in American homicide, from law-enforcement professionals to armchair criminologists.” —Harold Schechter, author of The Serial Killer Files on THE DYNAMICS OF MURDER

“A very readable study, intelligently presented and well supported with an extensive bibliography. A worthwhile purchase” –Library Journal on THE PROSTITUTION OF WOMEN AND GIRLS

“An excellent source for persons newly becoming acquainted with the nature, scope, and dynamics of minority crime and victimization.” –Criminal Justice Review on MINORITIES AND CRIMINALITY

“A welcome addition to the literature on women and criminality…. A concise, well-organized and clearly written review of important aspects of this social problem. “–Criminal Justice Policy Review on WOMEN AND CRIMINALITY

“A model of exposition not to be missed by anyone interested in the annals of American criminal behavior.” –Jim Ingraham, Ph.D., professor emeritus of American Studies at Bryant University on THE PICKAXE KILLERS

True crime titles include THE SEX SLAVE MURDERS 1 and 2, THE PICKAXE KILLERS, SERIAL KILLER COUPLES, MURDER AT THE PENCIL FACTORY, and a highly praised anthology, MASTERS OF TRUE CRIME.

Fiction titles include thrillers, BEFORE HE KILLS AGAIN, DARK STREETS OF WHITECHAPEL, MURDER IN MAUI, MURDER IN HONOLULU, SEDUCED TO KILL IN KAUAI, and STATE’S EVIDENCE.

The author has appeared on the Biography Channel and Investigation Discovery.