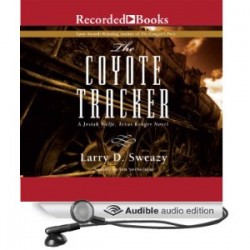 After a prostitute is murdered at the Easy Nickel saloon, Texas Ranger Josiah Wolfe finds his best friend, Scrap Elliot, in jail and wrongly accused. A strangely familiar horse and a mysterious code are the only clues Josiah has to prove his friend’s innocence and save him from execution. Once a Yankee reporter gets involved, Josiah is led to Blanche Dumont’s House of Pleasures, where he learns of a thieving, jail-broken accountant with strange ties to both the Easy Nickel and the town’s wealthiest banker. With a new railroad line blazing into town, everyone – especially the arrogant young sheriff – is determined to clean up Austin. Faced with the ticking clock of Scrap’s impending trial, Josiah Wolfe must find out who it was that went one step too far.

THE COYOTE TRACKER is available from Amazon and Recorded Books.

“A masterful page-turner full of suspense and surprises. It demonstrates the skill that has won Sweazy an appreciative following and numerous awards and recognition.” —Buddies in the Saddle

“A great entry in what has become one of the more solid Westerns still coming out. This harkens back to the old writers of the Old West . . . It’s the Western that Erle Stanley Gardner never wrote.” –Bookgasm.com

Larry D. Sweazy (www.larrydsweazy.com) is a two-time WWA Spur award winner, a two-time, back-to-back, winner of the Will Rogers Medallion Award, a Best Books of Indiana award winner, and the inaugural winner of the 2013 Elmer Kelton Book Award.  He was also nominated for a Short Mystery Fiction Society (SMFS) Derringer award in 2007.  Larry has published over 60 non-fiction articles and short stories, and is the author of the Josiah Wolfe, Texas Ranger western series (Berkley), the Lucas Fume western series (Berkley) and a thriller set in Indiana, The Devil’s Bones (Five Star).  A new mystery from Seventh Street Books will debut in 2015.

He lives in Indiana, with his wife, Rose, two dogs and a cat.