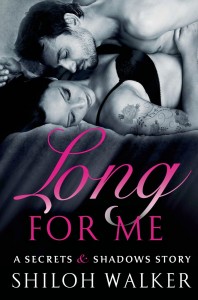 The Secrets & Shadows series is a romantic suspense series centered around a small town in Indiana, and the tortured heroes who try to find love as they struggle to overcome their dark pasts. Readers love Shiloh Walker’s hot writing and surprising plot twists.

In LONG FOR ME, Christina Bell remembers what it was like to be part of a loving family. The youngest of the Bell children, she simply cannot believe that her dad, or anyone else she loves, had a hand in her mother’s disappearance. She’s looking forward to moving on and spending more time with her sexy best friend, Guy Miller. But when her mother’s body is found—and the mystery of her death slowly reveals itself—Christina is left not knowing who to trust. What if Guy, her one true desire, proves to be her biggest danger?

Walker has been writing since she was a kid. She fell in love with vampires with the book BUNNICULA and has worked her way up to the more…ah…serious vampire stories. She loves reading and writing anything paranormal, anything fantasy, and nearly every kind of romance. Once upon a time she worked as a nurse, but now she writes full time and lives with her family in the Midwest. Interested in how she transitioned to writing the Secrets & Shadows novellas, THE BIG THRILL recently caught up with her to ask:

You are an incredibly prolific writer, and LONG FOR ME is the third book in the Secrets & Shadow romantic suspense series with St. Martin’s Press. When did you first envision this series and how is it different from your other work?

Romantic suspense requires a mixture of romance and mystery/suspense. How do you work the mix in your novels?

I’d say for the most part, it’s 50/50. My books get rather dark, but the emotion in them and the romance that develops between the lead characters is still key.

What do you find most compelling/interesting about this series? For instance, is there a message for the reader in every book?

I don’t intentionally set out to give a message in books. I think some people find them, though, on their own. DEEPER THAN NEED, in particular, though, one of the books in the series, did get to me. The hero has struggled with alcoholism. While that isn’t anything I’ve had to deal with directly, alcoholism destroyed a number of people in my life, so there were personal things that probably worked their way into the book at times.

The Shadows & Secrets series are set in a small town in Indiana. Why the setting, and do you find it difficult to find enough people with secret pasts in one location? Are you going to move the series around?

Small towns are something I’m familiar with…I’m one of those people who see a story in everything, and secrets everywhere, so it’s not hard to imagine twists and shadows. This is a close-ended series, though…there are three novellas, BURN FOR ME, BREAK FOR ME and LONG FOR ME…centered around one family, the Bell family—their mother disappeared fifteen years earlier and that tragedy shaped their lives. Then three full length books will release, starting with DEEPER THAN NEED, which releases in June.

As an ebook original, the stories are novella length. How different is the process for writing shorter books?

I’ve got a brain that’s just geared for writing a variety of story-lengths, I think. The trick for writing shorter works is that you simplify the plots…it’s easier if the hero and heroine already have a connection—ie: they already know each other, so you have the initial ‘intimacy’ or ‘attraction’ already set. You don’t want a lot of secondary characters and you can’t have numerous sub-plots dancing in the background.

Will we ever see the Shadows & Secrets books in print?

The ebook novellas, BURN FOR ME, BREAK FOR ME and LONG FOR ME, I can’t really say at this time… they are too short to put into print on their own, but whether or not the publisher chooses to seek other options? I don’t know. However, DEEPER THAN NEED will release in print and one doesn’t have to read the e-novellas to follow the story that kicks off in DEEPER THAN NEED.
Thanks to Shiloh for speaking with THE BIG THRILL. 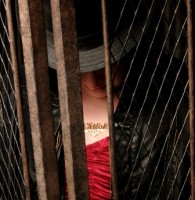 Shiloh Walker is an award-winning writer…yes, really! She’s also a mom, a wife, a reader and she pretends to be an amateur photographer. She published her first book in 2003. Her newest series, Secrets and Shadows, launches in April 2014 with the release of BURN FOR ME, BREAK FOR ME & LONG FOR ME.

She writes romantic suspense, contemporary and paranormal romance, and urban fantasy under the name J.C. Daniels.