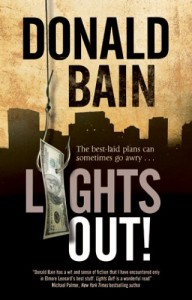 I’m often asked at writers’ conferences where I get my ideas. With LIGHTS OUT! it began in 1965 on a runway in Cincinnati, although I didn’t start writing it until 2003, almost forty years later.

In 1965 I was a PR executive for American Airlines and had been dispatched to Cincinnati from New York to handle the press at the scene of a fatal accident, and to act as the airline’s spokesman. One of our 727 jets, a relatively new model aircraft (the first tri-motor since the Ford Tri-Motor of the 1930s) had slammed into a hill while on its landing approach, killing everyone aboard.

Two nights later I was on an American Airlines aircraft waiting to fly back home. We were about to taxi for takeoff when the captain announced that there had been a massive electrical failure on the East Coast, shutting down the three New York area airports. I remember sitting there wondering whether it was possible for someone to deliberately cause such an electrical failure, and why a person would do such a thing. I noted my thoughts on an envelope, spent an additional night in Ohio, flew home the next day, and forgot about it.

Fast-forward to 2003. I was busy writing novels in the Murder, She Wrote series of murder mysteries based upon the popular TV show, and working closely with Margaret Truman on her Capital Crimes series. One day another failure of the power grid occurred in the eastern United States and parts of Canada. That started me thinking again: What if? I found the envelope with my notes scrawled on it and began developing a plot for a novel.

What if someone could arrange for a massive power failure and sell the exact date and time of when it would occur? Obviously buyers of such information would have to be unsavory characters with equally unsavory aims. Because the 2003 electrical failure had originated in Canada, I elected to begin the story there. I’ve never been good at writing bigger-than-life heroes, having always preferred to write about regular men and women who fall victim to their weaknesses, and to outside events. I made my main character, Carlton Smythe, a mild-mannered, hapless electrical engineer in a loveless marriage to a wealthy woman whose mother puts Mommie Dearest to shame. My character has been downsized from his job at a large Toronto electrical generating facility. What if he’s invited to present a proposal to the Argentine power authority for upgrading its facilities, and while in Buenos Aires meets a gorgeous, voluptuous Argentinean woman, Gina Ellanado, and falls madly in love? I liked that idea. Smythe would become a man trapped in a monumental male midlife crisis.

I knew that because Smythe was no longer working at the power company, he would have to have an accomplice there to create the actual blackout. Enter Paul Saison, an alcoholic French-Canadian engineer who once had Smythe as his boss. Saison has a gambling problem to go with his alcoholism and is deeply in debt. The only reason he hangs on to his job is the power company’s legal need to keep on the payroll a certain percentage of French-Canadians. Smythe enlists Saison as his inside accomplice to actually create the blackout, his first of many mistakes in this ill-advised scheme to become rich and flee to Gina’s waiting arms.

Of course, there had to be a buyer of what Smythe was offering, which gave birth to Dominick Martone, head of Canada’s Mafia, a harsh but sentimental character who sings opera when he isn’t ordering a hit on someone.

I liked my cast of characters, and fanaticized who would play them in the movie version—William H. Macy as Smythe and Robert DeNiro as Martone. As for playing Paul Saison, where is Peter Ustinov now that I need him?

I started writing but had to keep shelving the novel because of deadlines for other books I had under contract. I worked on it in spurts until 2012, when I found an extended period of time between assignments to finish it. My agent, Bob Diforio of the D4EO Literary Agency, loved it but had two suggestions. I’d originally named my protagonist Smyth; Bob suggested adding at “e” to the name. He also felt that I needed an additional final chapter to tidy up loose ends, which I wrote. My wife, Renée, with whom I now collaborate on the Murder, She Wrote series, also weighed in editorially.

Bob Diforio placed LIGHTS OUT! with Severn House, a fine British publisher with a strong presence here in the States. It was published in the U.K. in February, and its U.S. edition will arrive in bookstores and as an e-book in May and a hardcover in June. Michael Palmer, a wonderful writer and even more wonderful man, whom we recently lost, read it and said, “Donald Bain has a wit and sense of fiction that I have encountered only in Elmore Leonard’s best stuff.” Bless you Michael! Multiple award-winning author Hank Phillippi Ryan called it “Stylish, wry, droll and surprising.” And I love the comment from my friend, psychiatrist Bob London, who said, “I’ve treated many men going through a mid-life crisis but none as entertaining as Carlton Smythe.”

Naturally, Smythe’s grandiose plan to become rich and spend the rest of his life with Gina goes terribly wrong, and he ends up being pursued by the authorities, his wife and mother-in-law, Argentinean hustlers, and, of course, the Mafia. As my departed friend, Craig Thomas, who invented the techno-thriller years before Tom Clancy with his FIREFOX (the film version directed by and starring Clint Eastwood), once said in a lecture, “The secret to thrillers is ‘man running.’”

Donald Bain is the author and ghostwriter of more than 120 books, including 43 in the “Murder, She Wrote” series. His novels in the Margaret Truman Capital Crimes series include MONUMENT IN MURDER, EXPERIMENT IN MURDER, UNDIPLOMATIC MURDER, and INTERNSHIP IN MURDER. Other books include westerns, investigative journalism, biographies, and the bestselling COFFEE, TEA OR ME?, which with its three sequels sold more than 5-million copies worldwide. The recipient of numerous awards, he is represented by Bob Diforio of the D4EO Agency.

To learn more about Donald Bain, please visit his website.