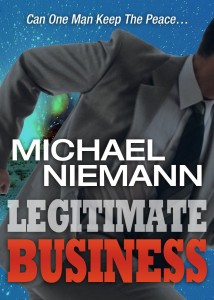 They say it helps to write what you know. Michael Niemann—a Ph.D and Adjunct Professor of International Studies at Southern Oregon University—has the right background to offer us a taut, authentic and intricate thriller of Africa that will satisfy fans of Wilbur Smith and Gerald Seymour.

In LEGITIMATE BUSINESS, protagonist Valentin Vermeulen, a Belgian investigator for the United Nations Office of Internal Oversight Services, is tasked with a routine audit of the UN peacekeeping mission in Darfur when a UN policewoman is killed. Her best friend claims she was targeted because she complained about shoddy armored personnel carriers (APC). Vermeulen’s investigation leads him to a gunrunning scheme operated by a British military contractor with more at stake than a few APCs with bad starters. The civil war in Darfur is about to turn much deadlier unless Vermeulen can prevent a cargo of stolen missiles from reaching its destination.

Michael graciously agreed to answer some questions for THE BIG THRILL.

Why did you make your protagonist, Valentin Vermeulen, a UN investigator? Do you have a background in the UN?

Once I decided to pursue writing fiction, I wanted to write thrillers and mysteries that were international in scope. John le Carré is probably my strongest influence in this regard. His novel THE CONSTANT GARDENER is, in my opinion, the finest example of such writing. Finding the right protagonist was one of the biggest obstacles. I didn’t want to create yet another intelligence agent, who, by definition, has to follow particular national loyalties—probably a reflection of my hybrid background, a German who’s lived in the U.S. for over thirty years. That led me to the UN. I came across a news story about an investigation of Pakistani peacekeepers. That introduced me to the Office of Internal Oversight Services (OIOS). I dug up every bit of information I could find and the character of Valentin Vermeulen began to take shape. OIOS investigators don’t carry weapons, have no powers of arrest, nor are they allowed to use force. But they have a lot of latitude in their investigations, as long as they are UN related. I try to exploit that contradiction as much as possible.

I have no inside track at the UN, except that it’s been part of my studies and teaching for the past three decades. Like all bureaucracies, it can be byzantine in its operations, a fact that is further exacerbated by the fact that any organization that has to keep its member states happy is by definition hobbled when it comes to quick action. The frustrating experience of the commander of the peacekeeping operation in LEGITIMATE BUSINESS is not uncommon.

Valentin uncovers a complex web of intrigue. Who is he up against in LEGITIMATE BUSINESS?

When we hear about gunrunning, we tend to think of shady characters like Viktor Bout, the former KGB officer who became a multimillionaire selling weapons worldwide. What we overlook is that those shady characters usually have a legitimate business side. They often contract with governments, especially if those governments want their sales to be opaque. So, rather than being an outright criminal enterprises, they straddle the line between legal and illegal.

Dale Houser, the British contractor in LEGITIMATE BUSINESS is such a character. A former paratrooper-turned-private-military-contractor, he wants to make money. He makes illegal deals, but he also contracts for the Brits, which gives him cover and allows him to invoke the power of the British government. He shows that the link between weapons manufacturers, weapons traders, and governments is much closer than the public assumes. That’s what Vermeulen is up against.

And there is Priya, the UN policewoman who comes to Valentin for help. Does she have an important role? Who are some of the other key players?

Priya Choudhury gets the story going. She’s a policewoman with a Bangladeshi unit and witnesses the killing of her friend and colleague. She can’t accept the official explanation and she approaches Vermeulen for help. She provides the first lead that allows Vermeulen to start his investigation. And she plays an important role near the end.

Another important character is Tessa Bishonga, a Zambian TV journalist. She’s the Darfur expert, speaks Arabic and provides the kind of insight that helps Vermeulen assess the situation. The back and forth between the two also allowed me to bring in the background to the Darfur crisis, which was one of my other important objectives.

Then there is Tony Gianotti, Vermeulen’s colleague who’s new and a bit annoying, but who helps unravel some parts of the scheme later in the book.

Masaad is the leader of a rebel group that opposes the government. He has stayed out of the peace negotiations because he wants nothing less than independence for Darfur. There are many splinter rebel groups in Darfur, which is partly the result of disagreements related to policy or strategy. I wanted to bring a rebel perspective into this story and Masaad is the placeholder for that.

Finally, there is Winston Wambui, a Kenyan military police officer who serves as Vermeulen’s driver and assistant. Like all sidekicks, he makes sure Vermeulen gets to the end of the story.

This multinational cast of characters is the reality for any UN peacekeeping operation. The one in Darfur has soldiers and police from some twenty countries.

Right from the start of LEGITIMATE BUSINESS the reader gets a real sense of setting from your descriptions. Tell us a little about your personal experiences in Africa.

I’m a trained Africanist, which is a fancy word for saying that I concentrated in contemporary African studies as an academic. My research focus was on southern Africa, regionalism, migratory movements, and related issues. That work took me to quite a few countries in the southern part of the continent and Ghana in West Africa. Since my work focused on political issues, I talked with people in a variety of governmental and non-governmental positions. I remember all those trips fondly. Although my work focused on political/economic issues, the people I met along the way left the most lasting impressions. They were the most wonderful and generous individuals I’ve ever met. They are part of what motivates me to set the novel in Africa. I still host a weekly African music show on my community radio station.

What drove you to write fiction?

Hmm. That’s a tricky question. I could quip that I wanted to write something that others would actually read. There’s more to it. I think of writing as a political act, whether fiction or nonfiction. The important difference is that the former has to have a solid story, the latter not always. I’m indebted to former colleagues who were fiction writers and who were kind enough to let me participate in the writing courses they taught. That got me started. My writing group does the rest. I’ve had many awkward starts. But I kept working at it. Which is my advice to new writers. Keep at it. Put your false starts in a drawer and start the next project.

Valentin’s credentials makes him an ideal candidate for a series character. Can you see him in other stories?

Yes, the beauty of Valentin as a protagonist is that I can send him anywhere in the world. That gives me plenty of possible plots to explore. As I get to know him better, I intend to work more with him.

Will your next novel be set in Africa?

There is a strong possibility that Kenya will be featured since it hosts a number of UN organizations at which fraudulent activities can occur. I hope to bring Africa into as many novels as I can.

What are your views about the problems in Africa and what needs to be done?

Africa is an extremely diverse continent with a population of more than one billion people living in fifty-four countries (plus two not recognized), with well over a thousand languages. Did you know that most Africans are multilingual? That diversity is completely lost on most non-Africans who tend to view the continent as one that’s in terrible distress.

If there is one problem that has persisted for the past two hundred years, it’s the fact that the rest of the world, particularly Europe and North America, believe they know what’s best for the continent. From colonization to the Cold War to the current neo-liberalism, it’s the one consistent pattern. Even the “good guys” are trapped in it. Such speaking for Africans has been disastrous. From the cynical drawing of borders, to the invention of “tribes,” to the never-ending supply of ideas for “modernization,” few if any have bothered to sit down and listen, certainly not the powerful.

I have to ask about your fetish with chocolate. How does one make a living teaching about the politics of chocolate?

Part of my goal as a teacher is to help my students see how different aspects of the world work. Taking a single item, chocolate, is a wonderful way to explore many aspects of the world. We start with pre-European Mesoamerica and cocoa consumption by Mayans and Aztecs, colonialism in West Africa, the complexities of commodity futures trading and world markets, and personal addictions in well-off societies. And we get to try chocolate. Since I’m adjunct professor now, the living is rather meager, but it’s fun.

What’s next for Michael Niemann in the world of fiction?

I’m 35,000 words into the next Vermeulen novel. This one is tentatively entitled  LEGITIMATE TRADE and involves human trafficking.

Michael Niemann is the author of “Africa always needs guns” and other stories, a non-fiction book on regionalism and numerous non-fiction articles on global and African issues. He has traveled widely through Europe and southern Africa. A native German, he lives in southern Oregon with his wife who keeps him grounded and his dog who gets him up early.