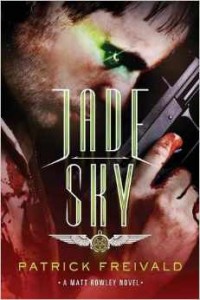 Matt Rowley hasn’t been human for years. A commando for the International Council on Augmented Phenomena, he hunts down superhuman monsters the military can’t handle. But his abilities come with a price: bloodthirsty whispers that urge him to acts of terrible violence.

An encounter with a giant, angelic being with wings of smoke and shadow casts him into a world of inhuman brutality, demonic possession, and madness, where he must choose between his family and his soul.

Tell us about JADE SKY in one line.

Do you have any marketing advice for your fellow authors? Any techniques that you feel have worked especially well for you?

Build relationships. If your only interaction with people is to shill your books, then you’re not a “friend” and you’re not fun, you’re an annoying salesman. On social media, talk about what interests you, share things you find interesting with no regard as to whether or not it can be tied back to your work. Be gracious and polite.

What kind of research did you conduct for JADE SKY?

The ideas for JADE SKY have been bouncing around in my head for the better part of two decades, and they encompass ancient religion and modern medicine in some odd and unconventional ways. I did a lot of digging into the nephilim, the Nazi deutsch physik programs, and what UN and NATO conventions regarding extra-national threats might be, taking into account everything from actual documented facts to conspiracy theories and myths surrounding all of the above.

I obsessed a lot over little details—where is the best place in the world for a multibillion-dollar drug lord’s center of operations? What death camp fits the needs of Frau Gerstner’s back story? Then I took what I wanted from each and changed what I wanted to. For example, there is no secret reichs bunker system under Dresden, but the death camp at Sobibor was closed shortly after a mass prisoner escape.

Describe your typical writing day. How do you balance your writing with marketing, editing, plotting, and all other commitments? What do you like to do when you’re not writing?

I’m going to take these two questions together.

I don’t have a typical writing day. I’m a full-time school teacher (physics, robotics, American Sign Language), a “sideline” beekeeper (which means more than a few colonies and less than a thousand), and the coach of a competition robotics team that takes up six hundred or so hours every year. During the three-month build season, I don’t have time to write, and it’s rare that I’ll even put a few paragraphs on a short story. But during summer vacation I might write fourteen to sixteen hours a day, five to seven days a week, and yet some weeks not at all.

When I’m not writing, building robots, or keeping bees, I like to read, play with my dogs and parrot, garden, play tabletop war games, and maybe fish a little. I’m a bit of a lazy, ADD-riddled workaholic.

Plotting for me is what takes a long time. I might have an idea percolating for months or even years, and I’ll add notes and ideas and character attributes to various files on my computer as they come up. When I sit down to actually write it, I’ll typically finish the first draft of a novel in three to five weeks. Then it’s off to beta readers (God bless you, beta readers!), and once I’ve got feedback I’ll do edits, which take another week or three.

None of this applies to BLOOD LIST, which I co-wrote with my twin brother Phil. That was a great process, but much more interactive than the mental pinball machine followed by writing frenzy I’m now accustomed to.

On the flip side, every short story I’ve written took no more than a few hours, from start to finish.

I’m a big fan of efficient writing, except in interviews where I tend to ramble. If an author takes ten words to say what could have been said in three, he’s making the reader slog through a lot of unnecessary verbiage to get to the meat. While here and there that might not be a big deal, if a hundred-thousand-word book could have been sixty-five thousand, the author is losing a lot of punch he or she could have had. If I may be allowed a shameless plug for a moment, my editing blog Word Soup (patrickfreivald.blogspot.com) is all about “boiling down” prose to make it as efficient as possible—I started it because too many people wanted me to edit their work, and I don’t have the time.

People don’t always agree with me, and that’s fine. What it comes down to isn’t whether you should use prologues or flashbacks or adverbs or dialogue tags (or the word “was,” which I eliminated except in dialogue from JADE SKY). These are details that will take care of themselves if you pay attention to the only rule that really matters: as the author, you should be able to explain the necessity of every word, sentence, paragraph, and chapter. Everything on the page should contribute to the plot, characterization, tone, mood, ambiance, SOMETHING. If it doesn’t, it shouldn’t be there.

I just picked up FRACTAL DESPONDENCY by Trent Zelazny, and just finished WHITE FIRE by Douglas Preston and Lincoln Child.

I recently participated in one of those Facebook games where you’re supposed to name off the top of your head ten authors that have really stuck with you. I did it, and the moment I clicked “post” I thought of ten more that should have been on the list. I’ve read a lot of Stephen King and Peter Straub, everything that Preston and Child have written, Tom Clancy, Dan Abnett, James Patterson, R. A. Salvatore, John Sandford, Clive Barker, H. P. Lovecraft, Larry Niven, Jerry Pournelle, Neal Stephenson, Dan Simmons, Ray Bradbury, Ramsey Campbell, Michael Moorcock, F. Paul Wilson, Robert McCammon, George R. R. Martin…is that enough? Too many? Just don’t ask me to name my favorite book and nobody gets hurt, okay?

I had a pretty good idea of what I was getting into. One of my older brothers did some small press stuff a while back, and a frat brother of his has authored over a dozen novels, three of which have become motion pictures. So I had a realistic idea of what the business side of things looks like, and some idea of how much it is and isn’t changing as the democratization of distribution channels roils the waters. I knew that the querying process is long and fraught with anxious thumb-twiddling; that movement can at times be glacial.

I guess the only major surprise, which in retrospect shouldn’t have at all been surprising, is the catty acrimony between, within, and around certain groups or types of authors. Most of the people I’ve met who are involved in publishing are gracious and delightful people who understand that in order to succeed others do not need to fail, but those that aren’t can be awfully vocal. I believe, however, that this problem will sort itself out in the long run, because such people are unlikely to develop lasting connections that will sustain a career.

Besides, “use fewer words, be patient, and try not to drink so much?” Cultivate a lack of ego when it comes to your work, and seek out people who will be honest but not cruel when it comes to critique. And then realize that when someone says, “This doesn’t work for me,” you literally cannot contradict that statement, because you’re not them. You might or might not ultimately heed their advice, but the decision to accept or reject advice should be deliberate and done with care and honesty. “It’d be too much work to change that at this point” is not a good enough excuse. Honest critique is the most valuable commodity a writer with a WIP can have!

I signed a five-book deal for JADE SKY, so I owe JournalStone four more novels in the Matt Rowley series. I’m working on a short graphic novella for Dark Discoveries magazine with Joe McKinney and artist Chris Bell, based on JADE SKY. I’m trying to write and submit at least ten short stories to pro-paying markets every year, and I’d like to put myself on pace for two novels a year, one Matt Rowley book and one…something else. We’ll see how that works out!

Thanks very much for having me, Ethan.

Patrick Freivald is an author, science teacher, and beekeeper. He lives in rural Western New York with his beautiful wife and far too many animals.