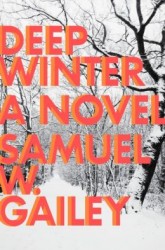 DEEP WINTER by Samuel W. Gailey is a dark, gripping debut novel of literary suspense that The New York Times and other major critics describe as a “beautifully written, suspenseful, page turner.” The book was a debut author pick by Penguin and Good Reads.

Samuel graciously agreed to answer some questions from THE BIG THRILL.

Tell us about DEEP WINTER

DEEP WINTER takes place in 1984 in a small Pennsylvania town where a woman is found brutally murdered one winter night. Next to the body is Danny Bedford, a misunderstood man who suffered a tragic brain injury when he was a child. Because of Danny’s limited mental abilities and menacing size, the townspeople have ostracized him out of fear and ignorance. When the deputy sheriff discovers Danny with the body, it’s assumed that Danny’s physical strength finally turned deadly. But the murder is only the first in a series of crimes that viciously upset the town order—an unstoppable chain of violence that appears to make Danny’s guilt increasingly undeniable. With the threat of an approaching blizzard, the local sheriff and a state trooper work through the pre-dawn hours to establish some semblance of peace. As they investigate one incident after another, an intricate web of lies is discovered, revealing that not everything in the tight-knit town is quite what it seems.

Publishers Weekly describes DEEP WINTER as “a moving picture of a man who becomes a moral compass.” What was the inspiration for your character and giving him a mental impairment?

Individuals that are misunderstood and underestimated have always intrigued me. I’ve always been drawn to characters on the fringe—outsiders that are often overlooked or marginalized, fair or not. Growing up, there was a kid in my school like that. He was bigger than the rest of us. He was quiet and kept to himself, but there was an unchecked strength about him and one could sense a potential volatile side to him. He also suffered from a pretty severe learning disability, but at that time, schools didn’t have the resources to give kids like him the attention that he probably needed. Later in life, I discovered that he took his own life and that has always haunted me. I was also drawn to the idea of a child trapped in a man’s body—someone that was emotionally and intellectually stunted, yet somehow had the unintentional ability to transform the lives of others. I wondered what would happen to a character like this if they were accused of a serious crime, and what would the reaction be in the small town where it took place.

Reviewers have categorized DEEP WINTER as everything from a thriller to mystery-suspense, to classic lit, and finally, grit-lit. What does “grit-lit” mean to you?

To me, grit-lit means a small town or rural setting, rough characters who have little polish to them, and situations that are dark and unsettling. The heroes are salt-of-the-earth people in an isolated environment. My favorite grit-lit writers are Larry Brown, Scott Smith, Cormac McCarthy, Urban Waite, Wiley Cash.

Why are you drawn to salt-of-the-earth good guys?

I was raised in Wyalusing (pop. 379), the locale for DEEP WINTER, by a stepfather who was country born and country committed. He instilled in me a moral compass that, although I haven’t always completely been true to, still guides me to this day. He was a hunter, a fisherman, someone that had great respect for the ground he walked upon. He built our house with his own two hands, digging into the earth, mixing his own concrete for the foundation, carrying rocks from the river to make walls. I’m just so impressed by that.

Let’s just say that I didn’t have to do a tremendous amount of research to create some of the characters’ struggles with alcohol and addictions. Fortunately, I’m currently in a place where I let my characters do my drinking for me, but I’m Scotch-Irish and have a family history of alcoholism—some of us have had success overcoming these demons; others not so much. So, when it came time to write about damaged characters, I drew upon my own struggles, defeats, battles waged with guilt and remorse, and injected these experiences into a few of my characters.

Like Heather Gudenkauf does in WEIGHT OF SILENCE, you use the device of switching and alternating narrative voice and POV to give multiple sides of the story. Do you think she influenced your approach to DEEP WINTER?

Yes, for sure. That is a helluva book. I really enjoyed the story, the tension, the mystery, and along with all those things, I was really drawn to her technique of alternating chapters between different characters’ perspectives. Gillian Flynn’s GONE GIRL is another example of successfully using this technique. If done right, I find, as a reader, it’s intriguing to watch the story unfold in this manner. I first considered writing the book entirely from Danny’s perspective, but after an early draft I decided I wanted to open up the narrative so that other characters could carry the story as well. It felt a little too claustrophobic and limited when it was only Danny’s POV.

Was it a challenge to write characters who can be so deeply despicable and brutal?

Not at all, actually. I believe every one of us is born into innocence, but it’s our environment that ultimately shapes and defines us. When creating my main antagonist, Sokowski, I didn’t want to merely depict a character that was born corrupt. I think like all people that veer off the path of morality, there are reasons for it. Sokowski’s mother abandoned his family when he was a kid. His father took his own life. Sokowski has a physical deformity. All these things manifest and fester, shaping someone like Sokowski, who never had the moral compass to get him back onto a path of righteousness.

Samuel W. Gailey’s debut novel is described by Booklist as “…so brilliantly done, so artfully underwritten with not a word wasted…” Drawn to rural life and the sometimes deceiving atmosphere therein, Gailey’s first novel and his works in progress are suspenseful mysteries and intriguing studies of human nature.  Deep Winter was a debut author pick by Penguin and Good Reads.