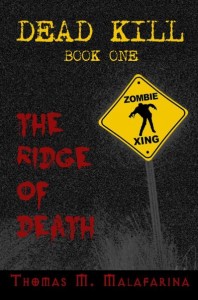 Thomas M. Malafarina’s new novel—DEAD KILL—opens in the year 2053. It’s been ten years since the long-anticipated zombie apocalypse arrived with a vengeance and wiped out more than half of humanity. However, not only did the humans manage to survive but they also succeeded in destroying the seemingly countless hoards of the undead and regained their rightful place at the top of the food chain. Now living safely in fortified towns and cities, humans go about their daily lives with little concern for the greatly reduced numbers of undead remaining in the unprotected outlands and forests. These creatures have been reduced to roadside nuisances albeit deadly ones.

Beginning with these potent images, I had the opportunity to probe into the mind of one of today’s best and most prolific horror authors.

How did the idea behind the post–zombie-apocalypse for DEAD KILL come about?

Well, every one and his brother seemed to be doing zombie apocalypse books, comics, TV shows, and movies for the past way too many years. And I fought the urge to jump into the fray for a very long time, feeling that the genre had been done to death; so to speak. I decided if I was going to take the time to write a zombie-based book it would have to be different than anything else out there.

There was a time in my writing career when I swore I would never write a zombie story. Then I broke down and wrote a zombie short story, “Bright of the Living Dead.” And then I wrote another called “Happy Valentine’s Day.” Then came the humorously twisted “Call Him Maury,” followed by “Dinner with Andy and Meg.” Things got a bit sicker with “A Love Best Served Cold” and last but not least the adventurous “Even the Great Will Fall.” In every one of these tales I strove to do something original and I think I was successful. As such I felt I might be ready to tackle a zombie-based novel.

So I gave the idea a lot of thought. As I usually do when writing a new story, I asked myself about a thousand questions. I looked at the world today and realized zombies destroying some of the world—such as underdeveloped, third-world countries—might be possible and even probable. But I seriously doubt that with the technology and the number of armed citizens we have in the U.S. we could possibly be overrun by a bunch of shambling, walking corpses; no matter how many there were. If you think about it, one single state in the U.S. has more firearms and ammunition per capita than the armed forces of many countries.

I chose to venture into what I believe is new and possibly risky territory. I realize zombie fans love to see the world destroyed and civilization thrust into Darwinian chaos. However, I decided to write a story where the zombie apocalypse happened and where sixty percent of the world’s population was wiped out. But in developed, well-armed countries such as ours the casualty count was much less. This story takes place in 2053, in the United States, ten years after the initial outbreak. Here zombies still exist and although deadly, are much less of a threat and more of a nuisance. (Think of a deer wandering out onto the highway—that is to say, a dear that wants to eat you alive.)

Newly reformed governments put bounties on the creatures and each citizen was rewarded one hundred dollars per zombie. This act of putting down the creatures became known as a ”dead kill.” (Killing something already dead.) This brought the population of undead down dramatically and for a few years provided a good way for some folks to earn a decent living. There are new strict government regulations for dealing with the dead and dying since the virus lives in every human and is only activated at time of death.

Citizens now live in protected fortified cities, which are constantly expanding and taking back more land all the time. They travel well-armed from city to city, passing through “outlands” that are populated by not only remaining zombies but by bands of wild and savage motorcycle-riding renegades, who are often more dangerous than the zombies themselves.

The book is a thriller set in this post–zombie-apocalypse world. Zombies are not the main focus of the book. The main focus of the book involves a psychopathic character who makes his living illegally in the dark and perverse drug-infested underworld of the outlands. That being said, I still found plenty of opportunities for good old fashion zombie gore.

Not a whole lot, unless you count my entire life. I’ve been a lifelong fan of horror and have enjoyed zombie films (even the dumb stuff) for decades. Like vampires and virtually any other mythical monster, you simply can’t be a fan of horror for so long and not know virtually everything there is to know about them.

I’ve been hooked on zombies since Romero’s “Night of the Living Dead” (black and white). And one of my favorite movies of all time is the original “Dawn of the Dead.” But I decided I would take the idea of a zombie virus to places where others have not yet gone. I’ve hinted about those ideas in this, the first of a series of Dead Kill books. Later books will go off in directions not yet covered in book one. My original idea was to do this as a single novel, but as I worked on the book more and more ideas popped into my mind so I plan on more.

What can you tell us about Jackson Ridge?

Jackson Ridge is the protagonist and a non-hero/hero. He is a freelance writer and reporter who covers news for a variety of news outlets. He is a husband and a father of a four-year-old daughter. He is not tough. He is not muscular. He’s just a regular guy living in a not so regular world. He’s racked up his share of dead kills just as any survivor has done, but he’s is about as far from anyone’s idea of a hero as you can get. He finds himself thrust into a role that requires he go outside of his comfort zone to help save the life of a kidnapped thirteen-year-old girl who was abducted and believed to be in the hands of a sick and twisted underworld psychopath.

Who is the antagonist in DEAD KILL?

The antagonist is a man who goes by the mythical name of Deimos. He is the insane leader of a gang of underworld outlanders that deals in a variety of drugs, prostitution, pornography, and some new really sick vices that can only exist in the world outside of the safe zones.

Will there be any presentations or signings for the book?

I’ll be doing appearances and interviews as they come up, but other than a future appearance on Webb Weaver Books Podcast (date to be determined, so check the website later) I have nothing planned.

Right now I’m working on short stories for another future collection for Sunbury Press including a possible novella. And I’m also beginning work on the second Dead Kill book. I have short stories coming out in 2014 in about fifteen or more short story anthologies from such publishers as Thirteen Press (Horrified Press) and James Ward Kirk Publishing to name a few. I also just acted as curator and editor for a recently released Sunbury Press anthology of horror called Undead Living.

You’ve only been publishing since 2010 yet you’ve written so many books and short stories. When do you find time to write?

I write whenever and wherever I can. Since I work full time and play weekends in two different blues bands finding the time is always a challenge. Time management is essential. For example, I write after work and on the weekends. If I’m sitting on my patio in the summer, I’m usually writing or editing. If I’m snowed in during the winter, I’m writing. Before bed I often edit and rewrite. Sitting in my car over lunch during the week is a good place to write.

Waiting for a car repair at a garage or in the doctor’s office is also a good opportunity for writing. I have an hour commute to and from work and often use that time to imagine my stories and occasionally record my ideas on my iPhone voice recorder. I have tons of notebooks that travel with me everywhere. If I’m on vacation, sitting in a hotel waiting for my wife to get ready to go out sightseeing I write. In other words, whenever I can find a few minutes, I write.

Most of my stories start out being written on note paper then I type them into MS Word and fine tune them there. Using notebooks allows me the flexibility to write whenever and wherever I choose.

Thomas M. Malafarina is an author of horror fiction from Berks County, Pennsylvania. To date he has published five horror novels NINETY-NINE SOULS, BURN PHONE, EYE CONTACT, FALLEN STONES and DEAD KILL – BOOK 1 – THE RIDGE OF DEATH, as well as five collections of horror short stories; THIRTEEN NASTY ENDINGS, GALLERY OF HORROR, MALAFARINA MALEFICARUM VOLS 1 AND 2, GHOST SHADOWS and most recently UNDEAD LIVING. He has also published a book of often strange single panel cartoons called YES, I SMELLED IT TOO; CARTOONS FOR THE SLIGHTLY OFF CENTER. All of his books have been published through Sunbury Press.