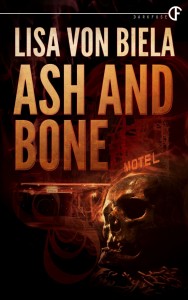 Every town hides secrets…and Cromwell Bay is no exception. Eileen Maroni is running from her past, but she envisions a new life in the tough little fishing village, where no one knows who she is—including the police.

Frank Foster just buried his best friend, and is struggling to come to terms with the devastating loss and his own self-doubt.

Nothing will ever be the same for them again when their paths cross at the Harbor Motel, and they learn what lies behind the door of room #8.

Tell us a bit about your upcoming book.

ASH AND BONE is both a departure—and a non-departure—from my other work. My novels, THE GENESIS CODE, THE JANUS LEGACY, and BLOCKBUSTER (coming January 2015) are techno and medical thrillers. ASH AND BONE is more of a horror/noir/suspense work. That said, it’s much like an early short work. I find that I prefer using the novel format for thrillers, and the shorter novella format for horror/noir work. It just feels right for me.

In ASH AND BONE, two characters—each damaged in different ways—converge in the town of Cromwell Bay and make a grisly discovery that significantly changes their lives. Eileen blows into town with a wad of cash from some prior shady activities. She buys the old, long-closed Harbor Motel and fixes it up for business. Frank ends up staying there on his way home from a dear friend’s funeral. His friend, a highly successful L.A. entertainment lawyer, had everything going for him, until he’s murdered in a fluke robbery at a convenience store. The loss of his friend and the sheer waste of it torments Frank as he stops for the night in Cromwell Bay. One of these characters financially benefits from the discovery and the events that follow, and the other winds up forever consumed with guilt.

What was your inspiration for ASH AND BONE?

Early last year sometime, I saw an old black-and-white movie. I don’t recall the name, but there was a scene that stuck with me. It was this gorgeous shot of a waterfront in the rain and mist at night (of course). There were these tall, old-fashioned street lamps along the road next to the waterfront itself. I loved how the light reflected off the wet pavement and sidewalk. It just looked so mysterious and beautiful. I tend to be a very visual person, and it hit me so strongly, I actually whipped out my iPad and made a note that I had to write a story, a book, a something that began with that scene. And so, ASH AND BONE begins with a lone character set in that scene. The reader doesn’t find out until later in the book who the character is and what he or she doing there.

Your work in the horror genre is quite a departure from your day job as a lawyer, but I imagine working in law gives you insights into the many ways people deceive each other. That has to come in handy when you put on your writing hat.

I actually became a lawyer as a second career, after being in IT for twenty-five years. I think all my various experiences come in handy when I sit down to write. For example, my IT career was a huge factor in writing THE GENESIS CODE. I was pre-vet in undergrad, and so have some biomed background, and along the same lines I published a weekly biotech law newsletter for nearly two years during law school. That gave me some great ideas for more biotech-themed stories, like THE JANUS LEGACY and BLOCKBUSTER. I’m in a pretty specific legal practice: foreclosure prevention. I see a lot of deception, and I also see a lot of how life can go terribly wrong for people, and the fear that can engender. Working in law also enables me to write credibly when a story involves legal issues or a lawyer. One of my characters in BLOCKBUSTER is a Civil Procedures professor, and so there are some realistic classroom scenes with a touch of humor that were fun to write.

Tell me about Cromwell Bay.

It’s an old mill town on the waterfront. I envision it being somewhere in Northern California—not near a big population center, though. It’s seen better days, when the mill was in its heyday and employed lots of people. When the story begins, the mill is long gone, the houses on the edge of town are all ramshackle, and Cromwell Bay is clinging to life as a fishing village. There is a little town center whose heart still beats—barely. The Cannery, the local bar and grill, is the hub of the place now. The old Harbor Motel is vacant, up for sale, and has been for some time when Eileen shows up and revives it.

You’ve published short stories and novels, but ASH AND BONE is your first novella. Did you plan on writing a novella, or did the story dictate the length?

Funny you should ask this. It was a combination of factors. I had just completed THE JANUS LEGACY and submitted it to DarkFuse. I knew it would be at least a couple of months before I would hear anything on that, and I was itching to write something else; I didn’t want to just sit and wait for word. So I was thinking I’d write something shorter that I could complete before word came. I also wanted to write something shorter because I was just in the mood to write more of a horror/suspense work, and, as I mentioned above, I like to do that in a shorter format. And there was that lovely image in my head of the opening scene already! I figured, hell, I’ve never tried writing a novella, so why not? All those factors worked led to my writing my first novella.

Tell us a bit about yourself—about your lifelong interests, hobbies, phobias, and pet peeves.

I am scared to death of spiders. Doesn’t matter how small they are, or how large and hairy. They all make my skin crawl.

Hobbies, oh, I have a lot of them. I consider myself a pretty decent photographer, and have actually sold a few microstock images (in my “spare time”!). I enjoy doing about any kind of needlework: sewing from my own patterns, knitting, that sort of thing. I like getting out on my bicycle when it’s not raining or blazing hot. I enjoy cooking—and eating.

Lifelong interests? I have always, always loved to read! I simply have to have a book going at all times. On a related note, I also have some lifelong fixations. I just love old motels, abandoned or still-functioning. The more neon and fifties-era paint colors, the better! I love road trips that involve long lonely roads and—surprise—old motels.

As you might imagine, working full time (and the associated commuting), as well as writing as much as I do, makes time tight and valuable. So it makes me nuts when I’m walking down the street or getting on the bus or trying to shop for groceries and there is someone in front of me who is just in zombie-land, walking slowly. I can’t stand it! Grocery shopping is a competitive sport for me. How fast can I get in, get the week’s stuff, and get out and head home? When there are people in the aisles that stand, mesmerized like cattle—well, it just makes me nuts.

Oh, too many to name them all! Some more or less so at different times. I’d say my earliest thoughts of writing were mainly inspired by Stephen King and early Dean Koontz. Judging from the nature of some of my work, Robin Cook planted some seeds in my brain early on as well. Rod Serling and the whole gang of writers for Twilight Zone (Matheson, Beaumont). Bradbury. As I actually began writing in earnest, I had the good fortune to come across Greg F. Gifune. He published my very first short story in 2002—after several rejection cycles. For someone I’ve never met in person, he has been the closest thing to a writing mentor I have. I learned a lot over the years from his honest rejections and editorial comments, as well as from his writing itself.

Funny story there, the first version of the story he eventually published (“Vacancy”) was heavily influenced by my business and tech writing. That is to say, it was very to-the-point. This happened, that happened, The End. Greg suggested I think about building some atmosphere, and recommended I read PSYCHO. I ran out and got a copy—and I remember being unable to put it down, reading with one hand and cooking dinner with the other that night. It was a very effective lesson for me.

Can you tell us about some of your other work?

Well, let’s see. My thriller novels tend to fall into the “be careful what you wish for” or “what could possibly go wrong?” categories. My debut novel, THE GENESIS CODE, involves a secret project to implant a device for transmitting data directly to the brain. And of course, bad things ensue. It took me two years to write it, and I finished it up right before beginning law school in 2006. Now, I read about devices not unlike the one in the book becoming reality, and that scares me. THE JANUS LEGACY is a tale about human cloning that asks “how far would you go to save your own life?” In both these novels, there is a technology that could be truly beneficial, but is taken too far, with devastating consequences. It’s a theme I enjoy. A lot.

BLOCKBUSTER is a BigPharma thriller set about fifteen years in the future, in which two huge firms are pitted against each other in a race to find the cure for a highly contagious, extremely deadly bacterial disease in an era of antibiotic-resistant strains. How far will these companies go to be at the top of the market? As it turns out, pretty darned far. This one was fun and challenging to write, as I had to make up all the technology myself. I’ll bet BigPharma firms would kill to have my Pathosym machines!

Thanks for visiting with us, Lisa. Best of luck with ASH AND BONE.

Thank you very much—I appreciate your taking the time to come up with these great questions.

Von Biela’s first publication was in “The Edge” in 2002. She went on to publish a number of short works in various small press venues. She is the author of the novels THE GENESIS CODE and THE JANUS LEGACY. Her first novella, ASH AND BONE, is set to be published by DarkFuse in May 2014, and her next novel, BLOCKBUSTER, is due out in January 2015.