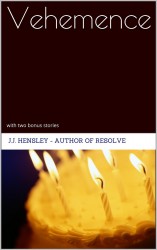 In this short story by critically acclaimed novelist J.J. Hensley (RESOLVE), we learn that Ronald Blyte has made a series of poor life choices that have placed him neck-deep in the drug trade. When his co-conspirators turn on him, Blyte pays an excruciating price for his sins. After Blyte discovers the woman he loves was caught up in an attack planned by his former accomplices, he decides there is no expiration date on vengeance and that the guilty parties will have to answer — in this life or the next.

VEHEMENCE is available from Amazon.

J.J. Hensley is a former police officer and former Special Agent with the U.S. Secret Service. He lives with his wife and daughter near Pittsburgh, PA. He is an avid distance runner and the author of the critically-acclaimed novel RESOLVE. Visit the author on Goodreads and at www.hensley-books.com orhttps://www.facebook.com/hensleybooks.

Mr. Hensley’s novel RESOLVE was a winner of a BEST OF 2013 AWARD, presented by Suspense Magazine.