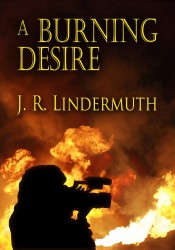 The past comes back to haunt former police chief Daniel “Sticks” Hetrick and his protégé, Officer Flora Vastine as an outbreak of arson shakes residents of rural Swatara Creek, Pennsylvania.

At first, the minor nature of the fires inclines authorities to see them as pranks, possibly the work of juveniles. Then, tension increases in the wake of a murder at the site of one fire and an increase in the value of targets.

A BURNING DESIRE is available from Amazon, Barnes & Noble and Whiskey Creek Press.

J. R. Lindermuth is the author of 12 novels, including six in the Sticks Hetrick mystery series set in a fictional rural community near Harrisburg PA. A retired newspaper editor/writer, he is now librarian of his county’s historical society where he assists patrons with research and genealogy. He has published stories and articles in a variety of magazines. Additional information on his books and writing is available at www.jrlindermuth.net