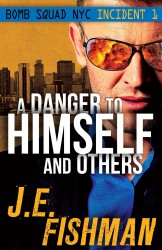 First book in the only series based on the real world of the NYPD Bomb Squad!

Bomb Squad Detective Manuel Diaz exists in a troubled state. A former Army bomb tech, he misses the adrenaline rush of combat and feels little if any love from his partner, Sergeant Sandy Kahn. When he brings home the pressures of his job, it causes fights with his beautiful roommate, Jennifer. And, as if that weren’t enough, he also harbors a torturous secret.

When one disabled army veteran blows himself up in front of an Armed Forces Recruiting Station in Times Square and another blows himself up in Crown Heights, Brooklyn, all of Diaz’s worries become magnified. More than anything else, Manny wants to prove these incidents aren’t suicides. But is he right? If not suicides, what’s going on here? Can he solve the cases without revisiting all of the things that haunt him from combat? Can he solve them without driving himself insane?

A DANGER TO HIMSELF AND OTHERS is available from Amazon, Barnes & Noble and iTunes.

“Is it possible for an author to write beautifully about bombs? J.E. Fishman has proven in A Danger to Himself and Others that it’s not only possible, it’s a fact that’s as apparent as the brilliant fire and acrid smoke bursting forth from an IED. This explosive new Bomb Squad NYC series, starring the cops who report to Commander Joseph Capobianco in the action-packed backdrop of New York City, delivers all the cinematic terror and thrills of a Showtime original series. Be on guard for a Bomb Squad thriller to be making a big bang on your bookshelf or Kindle when you least expect it.”
—Vincent Zandri, No. 1 Bestselling Amazon Author of The Remains

“Featuring meticulous research, memorable characters and relentless suspense, A Danger to Himself and Others ticks down to a conclusion as explosive as a block of C4. I can’t wait for Book Two in the Bomb Squad series!”
—Allan Leverone, Bestselling author of Parallax View and All Enemies

“With A Danger to Himself and Others J.E. Fishman has crafted a tale of old wounds festering until they erupt decades later in ways no one could possibly have foreseen or forestalled. You’ll be glued to every page of this white-knuckle series opener — and when it’s over, demanding the next installment!”
—Diane Capri, USA Today Bestselling Author of The Hunt for Jack Reacher Series

“While some thrillers could have whole pages removed due to superfluous writing, A Danger to Himself and Others stays its course and keeps the paragraphs short, the sentences direct, and the pages turning right to the climax. Likely to be a popular reading choice as the first in a series.”
—James Burt, ForeWord Reviews

J.E. Fishman is the bestselling critically acclaimed author of the thrillers Primacy and The Dark Pool, as well as the wisecracking mystery Cadaver Blues: A Phuoc Goldberg Fiasco. His Bomb Squad NYC series of police thrillers launches with A Danger to Himself and Others, Death March and The Long Black Hand. A former Doubleday editor and literary agent, he blogs occasionally for The Nervous Breakdown and the Huffington Post.