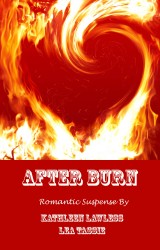 The Heat is On!  A string of seemingly meaningless arson fires baffles former homicide detective, Lt. Matt Nicols.  Until a charred corpse is discovered in the ruins, leaving him to discover the victim’s identity and the motive.  What he doesn’t need is his every step dogged by the all-too-perky head of the Insurance Crimes Prevention Bureau, Erica Johnson.  Particularly when he learns there is a pool in the station house as to who cracks the case first, and Erica is the popular favorite.

Erica only wants to do her job, with or without the help of Lt. Nicols.  What she doesn’t expect are the sparks flaring between them, generating a different type of fire.  Or the  deadly secrets from Erica’s childhood their investigation will uncover.

“An awesome romantic suspense that keeps you on the edge of your seat waiting  for the culprit to be revealed AND the arson investigators to set a fire of their own. AFTER BURN is hot, sexy, and impossible to put down.”  Amy Brantley, A Girl and her Kindle.

AFTER BURN is available from Amazon.

Kathleen Lawless is the award-winning author of over 20 novels and novellas.  She believes red wine is a basic food group and knows first hand that oysters are a natural aphrodisiac.  This mother of three lives with her own real life hero, Steel, which seems only fitting since years before they met she wrote a book with a hero named Steel.
This is her first collaboration with Lea Tassie.

Everything To Lose by Gordon Bickerstaff

A Danger to Himself and Others (Bomb Squad NYC: Incident 1) by J.E. Fishman