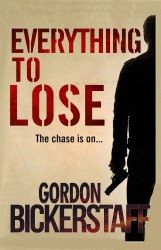 The Lambeth Group is sending scientist Gavin Shawlens to infiltrate a research group planning to launch a product based on old Nazi research. Zoe and her Special Forces team must cover Gavin’s back.

The research has backfired and people are disappearing then Gavin stumbles into the clutches of a family of adept criminals and the mission is compromised.

Zoe discovers she is up against forces much more powerful and determined than she anticipated.

Past events in Gavin’s life catch up with him. A powerful man in the USA decides that Gavin must die to prevent exposure of a 60-year old secret capable of world-changing and power-shifting events.

Time is running out for Gavin Shawlens and the mission.

Non-stop thrilling story of a heroine with brains and a skill set for extreme danger.
Electric action with bare-knuckle twists.

EVERYTHING TO LOSE is available from Amazon and Amazon UK.

Non-stop thrilling story of a heroine with brains and a skill set for extreme danger.

Gordon Bickerstaff was born in Glasgow. He is married, has two daughters, two grandchildren and lives in central Scotland. Following a long career teaching he now writes creatively using his knowledge of life science to underpin his stories.

His first novel ‘Deadly Secrets’ published by Endeavour Press (Aug 2013) is an action packed medical thriller. Gavin Shawlens is working on new technology worth a global fortune when he is reunited with the former love-of-his life.

His second novel and sequel ‘Everything to Lose’ published by Endeavour Press (Feb 2014) follows Gavin Shawlens as he investigates a rogue research group trying to introduce a new product founded on Nazi research. A Special Forces team led by Zoe Tampin has a tough job keeping Gavin out of trouble.

Strike Price by L. A. Starks

After Burn by Kathleen Lawless