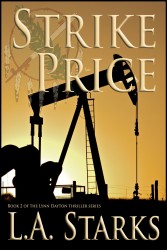 When several people involved in bidding for an oil refinery are murdered, the situation becomes far more than a billion-dollar business deal.

A self-made woman, Lynn Dayton fights to save lives after escalating attacks eventually reveal a hired assassin’s plan to draw another global power into dangerous confrontation with the United States over trillion-dollar oil stakes.

Lynn Dayton and Cherokee tribal executive Jesse Drum must learn to trust each other so they can find and stop the killers. Can sobering up really be fatal? How have so many of the deaths been made to appear accidental? Who’s creating weapons with modern poisons and ancient Cherokee arts?

STRIKE PRICE is available from Amazon and Barnes & Noble.

Strike Price takes the reader from Oklahoma Indian reservations to the streets of Florence, in an imaginative and well informed fusion of oil refining economics, Native American politics, and the potential for lethal mayhem in the global energy market”.
Michael Ennis – – – author of New York Times bestseller, The Malice of Fortune

4 Stars. “Wow! This was a wild ride. Many things I did not know about the oil industry and Native Americans in this book, I found very interesting for sure. It took me awhile to read this one, I had to back track a few times to catch up with the ever-changing story/plot which was very suspenceful (sic) and intriguing. I enjoyed reading Strike Price – very good book.”
Jeff – – – Goodreads

“L.A. Starks gets the smell and noise of the petroleum industry just right as oil company executive Lynn Dayton faces off with the seven deadly sins: pride, lying tongues, hands that shed innocent blood, hearts that devise wicked plots, feet that run to ruin, deceitful witnesses, and those who sow discord. You’ll find yourself turning the pages faster and faster as Lynn’s hell-on-wheels race to end a chain of murders takes her to the brink of her own death and a national catastrophe. Plan on not sleeping tonight.”
James Gary Vineyard – – – author of The Grave On Peckerwood Hill

“In Strike Price, L.A. Starks once again establishes herself as a master of the thriller genre. Lynn Dayton, a self-made woman in the oil industry, fights to save herself and others as she attempts to stop a plot to sabotage an oil pipeline and storage depot, and learn the identity of those who are murdering bidders for one of her company’s refineries. Fast-paced and convincingly choreographed, Starks’ novel presents a spot-on depiction of today’s oil business that grips and scares and offers the reader plenty to think about.”
Richard Holcroft – – – author of Patriot’s Blood

“4 Stars. I almost gave this book 5 stars and would have given it 4.5 stars if it were an option. This story allows one to imagine oneself flitting around Europe hobnobbing with the rich and then returning to Tulsa, Oklahoma and driving the dusty back roads of small-town USA. The story involves Saudi oil-rich sheiks, native Cherokees, Chechen mercenaries, and hometown American characters who are all embroiled in a plot to hinder the sale of an oil refinery. There are a number of believable characters who jump in and out of the story. The main character, a powerful woman named Lynn, has to fight prejudice as well as many other pitfalls in order to survive the story. I enjoyed reading this exciting story and was fully involved in the build-up to the final conclusion.”
John Buissink – – – Goodreads

Working more than a decade for well-known energy companies in engineering, marketing, and finance from refineries to corporate offices prepared Starks to write global energy thrillers. 13 DAYS: THE PYTHAGORAS CONSPIRACY was her first Lynn Dayton thriller; STRIKE PRICE is her second.

In addition to her books, two of Starks’ short stories have been published in Amazon Shorts. Her nonfiction has appeared in Mystery Readers Journal, The Dallas Morning News, The Houston Chronicle, The San Antonio Express-News, Sleuth Sayer (MWA-SW newsletter), Natural Gas, Oil and Gas Journal, and investor website Seeking Alpha.

Starks has run eight half-marathons. She serves as investment committee chair on the board of the Friends of the Dallas Public Library, a fund-raising and advocacy group that supports Dallas’ 28-branch civic library system. She previously served as president of the board of directors of the 7-branch Dallas Metropolitan YWCA.