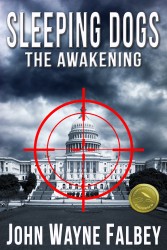 The President of the United States has been targeted for assassination—by his own party’s power structure. A national election is pending and the killing must look as if the opposition party is responsible. Desperate to prevent the crime and avoid an overwhelming defeat, the opposition turns to the only force that can stop it this late in the game—a mysterious hunter-killer team known only as the Sleeping Dogs. This blackest of black ops units was formed to carry out the wettest, most illegal missions. But a U.S. President, fearing exposure of the unit’s existence could spark an international crisis, ordered its members terminated with extreme prejudice. They faked their deaths in a plane crash and went underground. Now, 20 years later, they are asked to leave the safety of their anonymity and risk their lives for their country one more time.

SLEEPING DOGS is available from Amazon and CreateSpace.

John’s book made me feel like I stepped into a CSI episode with Tom Clancy as the director.
– Andrea Kurian, Orangeberry Book Tours

A tight, well written, foot to the floor thriller reflecting the current political situation both in the United States and world. The action begins on the first page and tension builds. A book I could not put down.
– Michael Boggia, Amazon Reviews

John Wayne Falbey writes techno-political spy thrillers and adventure novels. His debut novel, Sleeping Dogs: The Awakening, has been endorsed by Compulsory Reads. He also is the author of The Quixotics, a tale of gunrunning, guerilla warfare, and treachery in the Caribbean. A native Floridian and former transactional attorney, Falbey is a real estate investor and developer in Southwest Florida. He invites you to visit him at www.sleepingdogs.biz.

Strike Price by L. A. Starks