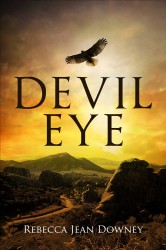 Remote viewer Penny Larkin is hired by the US Marshals Service to track down low level gun trafficker Juan Rico and finds herself as part of the weapons cargo on its way to Mexico. She will have to find a way to save herself in a country where thousands of women have been killed or gone missing.

This is a haunting sequel to the author’s break out novel, The Middle Eye. Both books are set along the U.S.-Mexico border. In each novel, Penny Larkin solves crimes by using her skills as a controlled remote viewer, a technique developed by the CIA in the 1970s to spy on the Soviet Union.

“Rebecca Jean Downey `astonishes me’, to borrow Diaghilev’s response to Jean Cocteau. It is rare to discover a debut novel that has not only a story line that is compelling, but also is coupled with the author’s sensitive attention to character development that takes them beyond the precise three dimensional figures and broadens their impact by addressing universal issues.”
Grady Harp, Amazon Hall of Fame Reviewer

DEVIL EYE is available from Amazon, Barnes & Noble and Books-A-Million.

Rebecca Jean Downey has a way of pulling you into her stories. You don’t want to put the book down until you make sure her characters survive!  She graduated from the Indiana University School of Journalism, and has had a life long fascination with the law. She read Sherlock Holmes in elementary school, and has devoured hundreds of mystery novels over her lifetime.  She finally realized that her home in El Paso, Texas was a perfect backdrop for sharing the haunting and sometimes horrifying headlines generated on the U.S.-Mexico border.

She lives in El Paso, Texas with her husband Mike, and dogs, Riley and Skye.  She is an Assistant Director of Institutional Advancement at The University of Texas at El Paso.