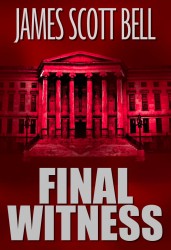 A cold-blooded killer is destroying all who oppose him. Will there be a final witness to the truth?

Young, idealistic law clerk Rachel Ybarra has just been handed a career-making opportunity––helping in the prosecution of an infamous leader of the Russian Mafia. But when the star witness turns up dead, Rachel discovers the case is not merely a battle for the truth––it’s a battle for her life.

The Legal Thriller That Won The First Christy Award for Suspense!

“In this fast-paced story of good vs. evil, Bell expertly creates a believable picture of federal law-enforcement activities. But it’s the more immediate struggle between Rachel and an absolutely chilling villain that will have readers biting their nails until the very end.” – — Susan Dunman for CBA Marketplace

James Scott Bell is a national bestselling author and #1 bestselling writing coach. He lives and writes in Los Angeles.