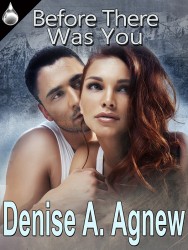 Kidnapped in a foreign country, Lana Burns’ faith in herself and the world has been shaken to the core. Once home, she finds her world mangled into nightmares and depression. Refusing to give in to fear and torment, she searches for answers. Now she must escape a dark mental place before it swallows her whole.

Former Force Recon Marine Aaron MacPherson made it through war without a scratch, but he doesn’t count thick scars carved into his mind, threatening to unhinge his happiness forever. His equilibrium teeters on the edge, his battle moving from combat to everyday life. One wrong word from a total stranger sends him on a path to destruction.

Both Lana and Aaron have seen hell, and group therapy might show them the way out. Forging a link between them could prove perilous to their hearts. When danger strikes without warning, Aaron and Lana must use their bond to create a way to survive the night.

BEFORE THERE WAS YOU is available from the author’s website, Liquid Silver Books and All About Romance.