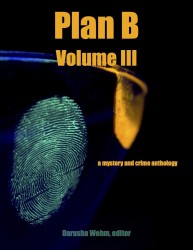 From Plan B: Volume III — a mystery and crime anthology — In Potentia Press — Darusha Wehm, Editor

A lovelorn serial murderer finds solace and deliverance on a mythical night at the Jersey Shore.

SIRENS is available from Amazon and Plan B Magazine.

Desperation is the same in any language. Madness respects no borders. Greed and revenge transcend cultural differences.

In this third collection of stories from Plan B Magazine, we find tales from all the corners of the crime world. From Cold War espionage to small town stick-ups, high-powered diplomacy to the opportunism of poverty, these are stories of the darkness of the human heart. And once in a while, how the light of our common humanity can transcend that darkness.

Gary Cahill (MWA-NY, ITW, Irish American Writers and Artists) had his first short story published as a Black Mask-style homage in Ellery Queen’s Mystery Magazine. Other work has since appeared with Pulp Empire, Short Story Me Genre Fiction, The First Line Literary Journal, Shotgun Honey, the Big Pulp anthology The Kennedy Curse, and Plan B Vols. I and II. He is a staff member at the Weehawken NJ Public Library.

Of Good and Evil by Gerald G. Griffin