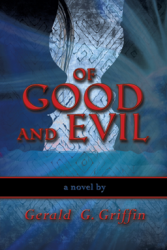 Fast paced, OF GOOD AND EVIL is a hard-charging suspense thriller engulfed in mystery. An unusual gripping tale of nobility versus tyranny, with vivid and vibrant characters, harrowing action, international locales, and a captivating love story.

The protagonist, Ron Sheffield, a gifted but troubled Green Beret, plagued by suicidal guilt because of “special abilities”, is discharged fro the army for going “crazy” and from there the fireworks begin. Almost immediately, Ron is brutally beaten and shot by the Mafia and is hospitalized, the doctors certain he will die. But his life is dramatically saved by Amber Ash, a wealthy woman who also possesses “special abilities”, not unlike Ron’s. This is the spark for them falling in love but also propels them into unending danger, including battles with mobsters, terrorists and an unsavory government cell out to kill them over secret, alarming Iraqi documents Ron possesses from his army service. In the midst of these battles, with twists at every turn, Ron, to save his sanity — with the help of Amber’s estranged father, Jonathan J. Ash, is forced by his own mental demons to become a specialized hit man for the Mafia, killing only Mafia members whom have fallen from grace. This, in turn, brings Ron and Amber face to face with an extraordinary secret society with powers beyond the imagination and with a different mind-set from their own, confronting them with a different kind of conflict.

Throughout these unnerving encounters, some of which are never fully settled, Ron is eventually confronted with the imminent nuclear obliteration of a major American city — and Amber and the secret society with it — by a suicidal terrorist cell that only Ron can possibly stop, but finds it impossible to do so. A cliff-hanging ending!

OF GOOD AND EVIL is available from Amazon and the author’s website.

Shane Porteous, author and reviewer, said of the book in his 5 star review: “Of Good And Evil” is the very embodiment of what a paranormal thriller should be. The book is perfectly paced and is simply in a league of its own. There is great maturity to Gerald G. Griffin’s writing, one almost never seen in MOST authors’ work, whether they are known or not.

“The sheer scope of this book is impressive. But more impressive than the scope is just how deftly Gerald G. Griffin handles all of the book’s themes. It is just flawless how well told this story is. It truly boggles my mind the sheer calibre of talent this author possesses. It is extremely rare to find such a skilled writer. Of Good And Evil is such a marvelous tale that you don’t even have to be a fan of its specific genre, and to me that is the mark of a brilliant story. One of the best books I have ever read.

“It also truly boggles my mind that this book isn’t on the New York Times bestseller list.”

Cynthia Westwood, a mystery writer, said of the book in her 5 star Amazon review:

“Gerald G. Griffin has mastered the art of intelligent and suspenseful writing in this book. With each page, the reader is informed, challenged, captivated and finally obsessed with  this story of love, honor, evil and political tumult.

“Exquisitely crafted, Griffin weaves a gripping tale of Captain Ron Sheffield’s quest for redemption and purpose, while battling his personal demons. The love story of the beautiful and mysterious Amber Ash and Captain Sheffield is poignant, sensual, strong and is an integral part of the novel, making this book equally appealing to both men and women.

“The fast pace and suspense of the novel kept me engaged from beginning to end. One of the best reads of the year, Of Good And Evil has all the elements of a best seller, and more. A true masterpiece!”

Rick Friedman, author and reviewer, said of the book in his 5 star Amazon review:

“Gerald Griffin has proven himself to be a writer of extraordinary skills. Of Good And Evil is a novel that is so finely written, so well plotted and paced, that the reader is immediately drawn into the book from the first page. That Mr. Griffin is able to use mere words to introduce the reader to Ron Sheffield is nothing short of breattaking — it is not often that a writer can make so complex a character, a person with such internal torments and external gifts, resonate so perfectly with a plot and locations as to keep the reader so captivated. A must read!”

Tracey Alley, author and reviewer, said of the book in her 5 star review: “Gerald G.Griffin has the special talent of a great and gifted story teller, able to let the reader suspend their disbelief for the duration of the novel. In his brilliant story of “Of Good And Evil” he takes the reader on a wild ride with the real world as his background. He also goes that step further that separates good writers from great writers.”

Gerald G. Griffin was born in Flint, Michigan. After receiving his MA and Ph.D in psychology from Michigan State University, he moved to Atlanta, Georgia, there setting up a private practice as a Consulting psychologist. As his busy schedule permitted, he began writing in his spare time, first turning out the published non-fiction work, THE SILENT MISERY–WHY MARRIAGES FAIL, then the three published novels, THE CORRUPTORS, THE DEATH DISCIPLE and THE LAST COMING. While in private practice, Gerald made it into WHO’S WHO in the South and Southeast and was cited as an Outstanding Atlantan as well as receiving other honors for his professional psychological work.

After 18 years in private practice, Gerald moved to Gainesville, Georgia, there entering writing full time, doing ghost writing and screenplays. Finally he wrote the published novel OF GOOD AND EVIL and its sequel A TIME OF RECKONING (as yet unpublished). OF GOOD AND EVIL is on the path to becoming a movie.

Gerald has two grown sons, and loves sports, music, theatre, travel and meeting new people. He is an introvert when writing, an extrovert when not.