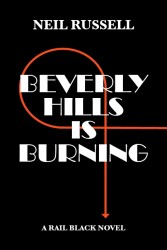 “It was just after midnight when the girl in the blue diamond necklace fell out of the sky.”

Beverly Hills is Burning is the third Rail Black novel.  Like the first two, City of War and Wildcase, it is edgy, violent, complex and sometimes sexually graphic.  (Hide the picture of your priest.)

Rail Black, a former Delta Force operator, is rich and lives in Beverly Hills.  But unlike many wealthy people in the world’s entertainment capital, Rail is not in show business.  In fact, he avoids it at all costs.  Until now.

Doing a favor for an ex-con producer, Rail ends up the owner of a movie company.  And there’s nothing fun about this place.  Nor about Valentine Jones, the actress who is about to star in the company’s biggest picture.

Exploding from ninety years in the past, a time when gangsters and tycoons roamed Hollywood and scratched each other’s wallets, Rail is thrust into a labyrinth of murder, duplicity, money, sex and power.

Set in Southern California, New York, Venice, Havana, Mexico and Cyprus, Rail must disentangle the past from the present and come to terms with his feelings for Barrie Fontaine, a long dead woman—and extraordinarily brave pilot—he has never met.

And somewhere, out there, is Matty Aspirins, a hitman on a mission all his own.

BEVERLY HILLS IS BURNING is available from Amazon and the author’s website.

“Neil Russell is the king of adventure thrillers… BEVERLY HILLS IS BURNING is a tour-de-force of hot action, cool suspense, and steamy sex.  …a once-in-a-lifetime ride with producers, screenwriters, Mafia hitmen, and money.  Lots of money.  You’ll love this book.”
Gayle Lynds
New York Times bestselling author of THE BOOK OF SPIES

“What would happen if an incredibly gifted writer smashed together the best of Bond, Hammer and McGee?  Could they create a new category of hero?
“Turns out Neil Russell is that author.  Rail Black is that hero and BEVERLY HILLS IS BURNING is that book.  Not for the timid or PC crowd, “BURNING” is filled with intense sex, harsh language, graphic violence and a great story interweaving mysteries from 1930’s Cuba with today’s Hollywood.
“Gangsters… Hollywood stars, starlets, sexual predators and producers do things that will make parts of you stand on end…”
Myles Knapp, Thriller Reviewer
Bay Area News Group

“Neil Russell’s BEVERLY HILLS IS BURNING is everything a thriller should be.  Former Delta Force operator, Rail Black is a contemporary knight errant, patrolling the seedy boulevards of La-La Land… reminding me of John D. MacDonald’s iconic Travis McGee.
“Description and dialogue are edged weapons, employed expertly… acerbic wit and indelible metaphors paint a mordant portrait of L.A. corruption as only a veteran Hollywood insider could.
“Warning: This is a tough tale about bad people who use gutter language and do ugly things… You shouldn’t wait a minute longer to dive in…”
Robert Bidinotto
Bestselling author of HUNTER: A Thriller

Neil Russell is president of Site 85 Productions, an entertainment-focused intellectual property rights company based in Beverly Hills.  A former executive with Paramount, Columbia, MGM/UA and Carolco Pictures—the company that produced the “Rambo” movies, “Terminator 2” and “Total Recall”—he also founded and headed Carolco Television Productions.  Site 85 has entered into agreements with numerous entertainment companies, including Jerry Bruckheimer Films, Activision, MGM, Columbia, Walt Disney, ABC, Universal, Warners, Scott Free Productions, F/X Networks and many others.  In addition to his novels, Neil authored the book, “Can I Still Kiss You?: Answering Your Children’s Questions About Cancer,” which grew out of his two successful battles with the disease.  A graduate of Parsons College, he is a member of the Naval War College Foundation and numerous entertainment industry organizations.  He is also an honorary member of the Hmong community of Laos for helping provide Hmong children with prostheses for limbs lost to mines.   www.Neil-Russell.com